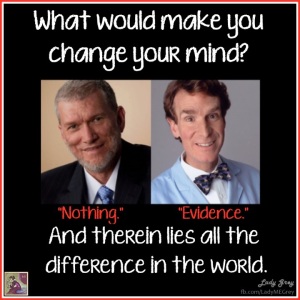 When I discuss religion here, it is usually about claims that theists make based on their respective religions. In most cases, those claims and religions get their details from what are deemed “holy books”.   These can be anything from how the universe came to be, to how one should eat, or how one should treat other people, etc.

Many theists want to start with a presupposition, that their holy book is true. What they forget is that to everyone else but a believer, it is a set of claims.

The Department of Communication at University of Pittsburgh has a great explanation of how claims, reasons and evidence works. Claims aren’t evidence of themselves like the theist presupposition requires.  They can be evidence that people did indeed believe such things, but they are not evidence that the events happened or the beings existed.

Addendum:  if you want to see me discuss this with a Christian, go to Joe’s blog here: https://trueandreasonable.co/2014/12/23/no-evidence/   At this moment, if my posts are still up, Joe is trying to use trial lawyer arguments for evidence for his god.

This morning I read The Friendly Atheist’s (aka Hemat Mehta) post on Patheos: “WA Lawmaker Attends Fundraiser for Liberty, a Proposed 51st State for Christians”   Of course these idiots think that they can just take other people’s land, up in the northwest US and that the US Constitution will allow this.   That won’t happen. Now, perhaps they can just go Alabama since Christians have been trying to make that a theocracy repeatedly. But they of course don’t want a coastal state since it’s hot, going to suffer from the climate change they deny, and will get nailed by hurricanes that they always claim come because of someone else’s “sin”.

We’ve seen nonsense like this before with the founder of Domino’s Pizza, Tom Monaghan, (one of the rabid Catholics with Opus Dei) wanting a Catholic town. He did get it, calle Ave Maria, Florida. Ah, only in Florida. The Wikipedia article says this about it “Ave Maria has a severe mosquito problem and has been sprayed more than 30 times via airplane with pesticides by the Collier Mosquito Control District in 2015 with organophosphates and pyrethroids,[21] making it the most sprayed area in Southwest Florida.” Seems they have their own version of the ten plagues.

For the war bit, I read an opinion piece in my local Sunday paper by Chistine Flowers. You’ve seen her name on this blog before because she is a Roman Catholic apologist, who does get upset when the truth is told about her ignorant religion. She’s at it again, with her op-ed piece “With new abortion legislation, America is on the right track”. This is what she claims right off “’ I’m here to dispense with the niceties of “can’t we all get along?” No, we can’t. The fight for the right to life is a war.”

Oh my, how silly. Ms. Flowers certainly wants a war, doesn’t she? Alas, she’s declaring war against the United States of America, the vast majority who doesn’t agree with her religious ignorance and demands for a theocracy. Poor Ms. Flowers, she has declared that unless she gets her way, no exceptions for abortion and her theocratic nonsense in place, she’ll become John Brown at Harper’s Ferry. Now, it seems either Ms. Flowers isn’t so pro life since she seems to be so ignorant about John Brown, because the truth of that particular story is that John Brown was an incompetent man who got people killed and failed at what he claimed he was trying to do.

Ms. Flowers is “relieved” that men are taking away health care choice from women who dare to disagree with Ms. Flowers. She has no problem with laws being made with ignorance of basic medicine, having no problem with nonsense like claims that ectopic pregnancies can be “fixed” as the claims in the Ohio legislation. She goes on to lie about Rep, Brian Sims being “aggressive” to anti-choice protestors (an “older white woman and three teenagers” as Ms. Flowers strangely specifies) when he said this “”Shame on you. What you’re doing here is disgusting. This is wrong. You have no business being out here,” and you can watch it here: https://www.pscp.tv/BrianSimsPA/1BRJjvOnrzwJw   Hmmm, compare this to accusations of murder and false information that Ms. Flowers advocates to be told to women who choose to get an abortion and the murders of people that anti-choice have been doing for years, bombing clinics, and putting up lists of doctors to be killed, etc. It seems that yet again, Ms Flowers gets offended to have the truth be shown about her religion and her attempts to control people because of it. It isn’t very flattering to be shown to be wanting the same sharia law that Ms. Flowers and other conservatives keep trying to lie about being used by Muslims in the United States.

Ms. Flowers goes on to laud that some of our conservative Christian legislators here in PA decided to show how wonderful they are by voting on a bill called The Downs Syndrome Protection Act, that they invented to try to claim that abortions were doing done left and right for fetus’s with downs syndrome. They of course forget to mention that Downs Syndome is not the media version of the happy child that is affected by a mild form. Down’s Syndrome can manifest many ways, and not all parents can handle children with this syndrome. She also forgets that the Republicans in the legislature of PA have consistently voted to cut help to mental health and medical support for those afflicted by such problems. It takes a lot of hypocrisy to try to use people with Down’s Syndrome to try to legislate your religion in to law.

Alabama State Sen. Clyde Chambliss, who sponsored the bill, characterized the legislation as a necessary government intervention to protect human rights. “When God creates the miracle of life inside a woman’s womb, it is not our place as human beings to extinguish that life,” Chambliss said.”

What a pathetic human being, Ms. Flowers is, for all of her claims of being “pro-life” but intentionally wanting to force a woman to risk her life because Ms. Flowers thinks her god wants it this way.

Despite her claims that the “pro-life” movement should be more than “pro-birth, Ms. Flowers doesn’t care as long as she gets her way, and she’s threatening to go to “war” for it. Hmmm, who else has said that? Ah yes, the fighters who want an Islamic Caliphate, to control people by their hate-filled and ignorant religion who murdered people who didn’t agree with them. Well, Christine, the folks who are in ISIS want to tell you how much they approve of you. Just put in a burka and you’ll be all set.

I’ve a new follower “God’s Geological and Math Signs”. Oh my, this person’s website is utterly hilarious. For a religion that is supposedly followed by faith and no evidence needed (as told to me repeatedly by various Christians), this individual certainly is desperate for evidence that s/he is right. As an actual geologist, I find this utterly ridiculous. Perhaps only the classic nonsense by self-claimed prophets and liars like Falwell, Robertson, Graham are more pathetic. This poor individual claims that Alpha Centauri is the “same size” as our sun, which is it not, and seems to have no idea it is a multi star system. He also seems to think that it’s amazing that he can draw crosses all over the place. Note the Holy Cross Chile pepper So many Christians are walking talking examples of the Dunning Kruger effect. This person is also one of those who seems to think that all other religious believer “really” agree with him, by insisting that all religions are about his god (ignoring his bible as convenient, including Exodus 12:12)

Otto’s Pub & Brewery has a great new Cherry Wheat beer. It’s so much better than the Sam Adam’s version, with a good cherry nose and a color tending toward red. We stop when we can on our way back from visiting relatives. I got the gyro (about the size of two) and my spouse got the braised beef sandwich. The food is always fabulous there.

The nonsense in American politics is pretty much all right now about the Mueller report. We have a AG who is intentionally lying to Congress which is pathetic since we now have most of the report and can read it, and it seems we’ll shortly have Mueller testifying. We also have a orange moron who is desperate to hide his financials. Hmmm, now he has said that only the guilty hide things. I’m guessing he’s hiding money laundering and/or showing he doesn’t have the money he claims, and banks will never deal with him again after his presidency. Mueller found that Trump didn’t collude; but indicted how many of his minions for other crimes found, and we still have the Trumpies never reporting to the FBI that they were approached by the Russians and Trump who exhorted the Russians to attack the US’s IT systems. I’m personally supporting Elizabeth Warren, who is one of the democratic candidates.

I’ve made another batch of beer. It’s “Don’t Be Mean to People – a Golden Rule Saison” from Northern Brewer. It was created in support of LBGT folks in North Carolina when their state gov’t decided to get involved in people’s bathroom choice. I had the kit sitting around and hadn’t realized how long. The malt powder became large blocks of hard malt. I melted them and things seem to be proceeding apace. Should be bottling in a week or so. They don’t have it in stock anymore.

That’s it. Have a nice weekend!