*I* object to this stupid challenge because it’s as effective as prayer since so very few are donating money which actually helps! Ooooh, big freakin’ whoop that people are getting wet. They whine “but it gets attention to the issue.” What idiot under what rock doesn’t know about cancer or whatever? it’s the same as prayer, playing pretend that you are actually helping when you are doing NOTHING.

Send real money to real people doing real things to help the problem, to cure cancer, diabetes, Parkinson’s, brain tumors, just do something REAL.  A dear friend of mine will probably die from or suffer losing his limbs from Type 1 diabetes.  He needs help, not stunts.

Well, we’re home from GenCon. A very nice vacation and I’m exhausted.   Here are some more photos of what we saw and did out in Indianapolis. If anyone sees a photo that they would like a copy of, I do still have the original digital files. I’ll probably keep those around for a few weeks. The following are my cleaned up versions of what I took. (part one of this series can be found here)

More photos from the zoo

END_OF_DOCUMENT_TOKEN_TO_BE_REPLACED

My husband and I don’t get much of a chance to go to the bigger science fiction/fantasy/comic/gaming cons here in the US.  We’ve been to DragonCon a couple of times and the same for GenCon, which is likely the largest gaming convention in the world.  Gaming, in this instance, means role-playing games, those ones that religious idiots claimed (and still claim) would lead to knowing “real” spells and worshipping Satan, card games, board games, and some computer/video games.

I don’t know any real spells and I’ve been playing for 30 years now.  Sigh.  Rush hour would be a whole lot different if I did know these “real” spells…..

We took a few days extra to explore Indianapolis.  The zoo here is very nice (alas no snow leopards) and I also got to see the “catacombs” under their old market building.

At the con, there are also people who do “cosplay” which means dress up as their favorite characters from books, anime, movies, games, etc.  The main day for that will be tomorrow. But here are a couple of photos of cosplayers now.

Back with more photos in a day or three.  Part 2 can be found here.

Here in PA, we have yet more evidence that those who claim to be “pro-life” are concerned with nothing more than control of anyone who disagrees with them. There was a bill that would require that employers offer their pregnant employees a seat or allowing them to have a beverage at their work station. We have 55 legislators who have supported a bill that would significantly restrict abortion access. You know how many of the same people voted for this aid for women? Three. Yep, so much for thinking of the women and children. It’s only “think of how much we can force them to obey something that we claim is true.” Lovely to see such a perfect example of hypocrisy. 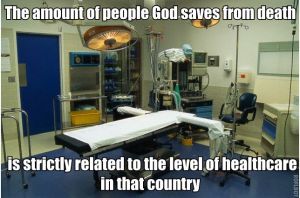 On other matters, prayer as a subject has been on my mind because of the ebola outbreak in western Africa and its constituent countries. A missionary and a doctor got a rare experimental serum created by the scientific method and appear likely to survive the ravages of the disease. This serum was allowed to be used because of a US exception to the law that if something might help, the drug or treatment can be used without the usual safeguards. This also means that this serum may never be available if it doesn’t meet the usual standards of safety and effectiveness *OR* if it doesn’t meet the profitability for its producer. A lot of people will again be left with nothing or with prayer as their only options.

And we know that prayer is utterly ineffective for actual aiding the sick and dying. At best, it may make people believe that they feel better, but they still die with the same rates as anyone else. It also makes people feel like they did something when they did nothing but whistle in the wind. This is underlined in the latest couple of columns from Billy Graham and Rabbi Gellman of the God Squad.

In Billy’s column, the querent says that people get better or not depending on how they respond to treatment, prayer does nothing. Of course, Billy insists that prayer is important because people “almost always turn to prayer” if they or their loved ones have a “serious health crisis.” In case you don’t recognize this, it’s the claim that there are no atheists in foxholes so, surprise, there has to be a god! (there are plenty of atheists in foxholes) Billy then goes on to say that heck, even if there is no god, we should pray for them anyway, it can’t hurt can it? He also assumes that the querent isn’t sure if this god exists, and then goes into making the usual baseless claims that this god does, that its avatar Jesus exists and that we should believe no matter what,, making the usual Pascal’s wager argument. Yep, the bible says that JC says that he is the way and the truth and the life, but we may as well believe that Lord Krishna is the same thing, with the same amount of evidence.

Rabbi Gellman’s column (beware site has annoying popups) has the querent, a Catholic, asking if the prayers that they say daily at mass do any good. They admit that the prayers make *them* feel good, because they imagine that they are doing something. The querent wants to know if this god gives the patient “peace and acceptance”.

The rabbi addresses this as the difference between why some people believe and some people don’t. Theists believe in things that have no evidence. Other theists don’t believe that other gods do anything. And non-theists don’t believe that something happens when there is no evidence of such a thing. The rabbi does admit that there has been no scientific evidence for prayer working. Good for him, for that is the truth. But the rabbi wants to keep pretending that something happens when there is nothing that shows it does. One may as well say that “hey, there is no evidence at all for aliens visiting earth. But heck, I want to believe in it anyway, no matter what reality says *and* I’ll keep telling nonsense to others so I feel better about myself.” Seems a bit delusional, no? END_OF_DOCUMENT_TOKEN_TO_BE_REPLACED