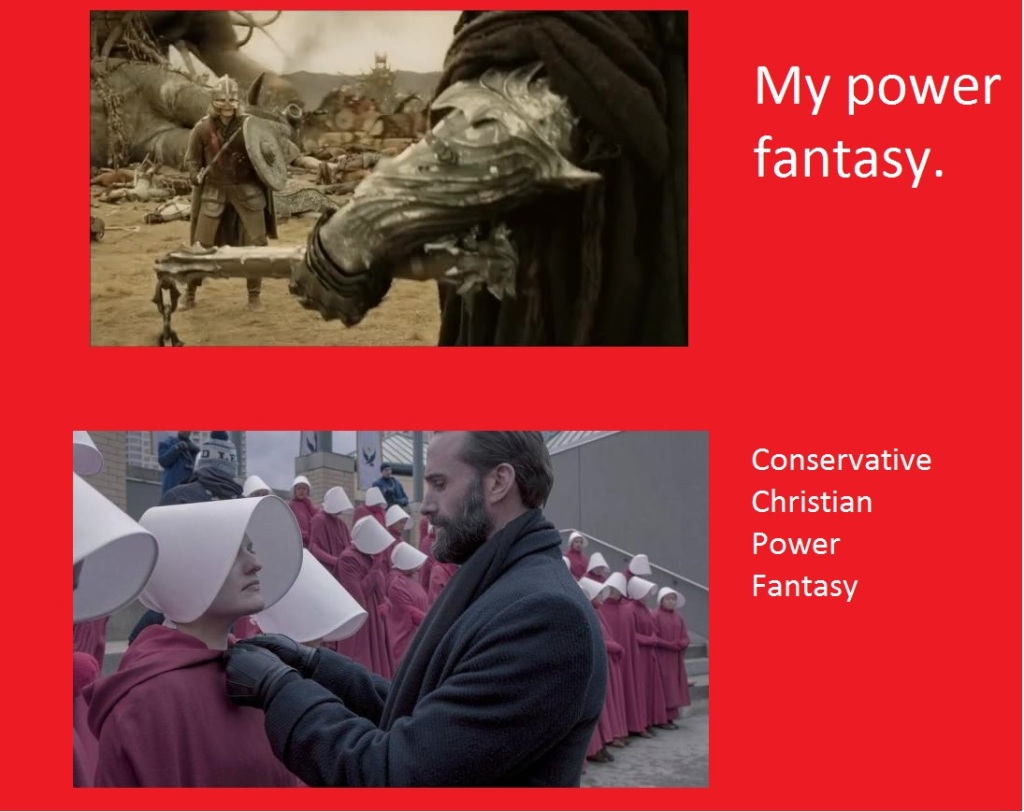 Christians often took fits about sword and sorcery fantasy, especially D&D.   Who are the heroes here?

We have 6 new additions.  I had befriended a little kitty earlier this year.  She had a lame front paw so I fed her and gave her a place to sleep.  Then I saw that she was probably pregnant, but she was so tiny, I figured that she would either have one or two kittens or lose them altogether as is common for new feline mothers.

She had them under a neighbor’s shed and then she brought them to our garden.  One disappeared and ended up back at the shed.  So after a couple of weeks, everyone is now caught, inside the house and being tamed.  The vet said the momma cat was only around a year old and she’s only a little over 6 pounds (about 3 kilos).  So we are getting her spayed because if she is such a good momma at this age, we’ll be up to our hips in kittens.

Momma cat is Hera.  The white and stripes (females I think) are Athena and Harley (Harlequin due to her face that you can’t see here), the three stripey/spotty boys are Apollo, Jason ( ala the Argonauts, for being quite the explorer) and Leo.  She’s in the midst of weaning them but they are about as big as her. 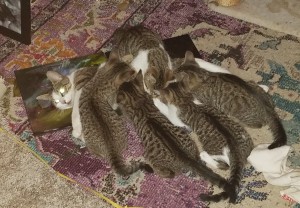 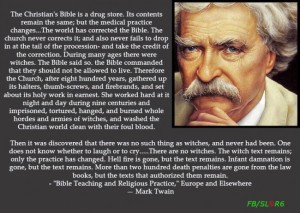 I think I may have broken our favorite unfunny Christian comedian, John Branyan:  “I would consider the stopping of the earth’s rotation as evidence you have a husband.”  Now, since no one ever claimed my spouse could stop the earth from rotating like the bible claims this god can stop the “sun” aka stop the earth from rotating, how can that be evidence of a 50+ year old Army veteran who is married to a 50+ year old me?  Of course, JB’s Amanda, has such a good time trying to claim I’m not human *but* she’ll be “forced” to vote for Trump because of me.  Such a pair of conservative Christians.

Poor JB, he has ended up here after thinking that it’s funny to be misogynistic just like Donald J. Trump, whom it seems to be living up to his claims of being an sexual abuser.  Oh well, that’s all he has, the “comedy” of a bully, who doesn’t like it at all when he’s called on it.  This is what conservative Christians are.

In other news, I have a momma cat and her kittens in my backyard.  The momma cat lets me pick her up and pet her. Now begins the process of taming the four kittens.  I discovered, again, that kittens have claws with monomolecular points on them.  🙂 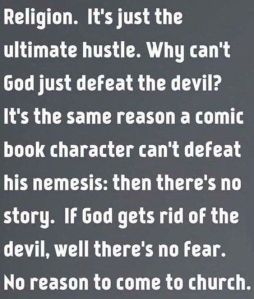 I felt like a long post today, sitting here in the air conditioning.  If you’ve been reading my posts, you’ll have seen most if not all of this before.  Move on and watch part of one of my favorite cartoon movies Rock and Rule: https://www.youtube.com/watch?v=aR-Z92eXVoo

Occasionally, my spam filter catches some lazy Christian spam.  The below is that (in italics) and what my responses to such nonsense.

In December of 2017, Donald Trump made history by recognizing Jerusalem as the capital of Israel. Why is this big news? Because by this the Jewish people of Israel are now able to press forward in bringing about the Third Temple prophesied in the Bible.

Funny how the Israelis don’t seem to be interested at all in what evangelical Christians want.

Jewish Rabbis have publicly announced that their Messiah will be revealed in the coming years who will be a leader and spiritual guide to all nations, gathering all religions under the worship of one God.

Of course, this is simply nonsense. Their messiah isn’t the Christian one. And they claimed this would happen a couple of thousand years ago too, and it hasn’t happened yet.

Biblical prophecy tells us that this Jewish Messiah who will take the stage will be the antichrist “who opposes and exalts himself above all that is called God or that is worshiped, so that he sits as God in the temple of God, showing himself that he is God” (2 Thessalonians 2:4). For a time he will bring about a false peace, but “Therefore when you see the ‘abomination of desolation,’ spoken of by Daniel the prophet, standing in the holy place (Matthew 24:15)…then there will be great tribulation, such as has not been since the beginning of the world until this time, no, nor ever shall be” (Matthew 24:21).

Ah, here we go, the usual Christian claims that anyone but them doesn’t have the truth and are evil. It again shows that any concern that a conservative Christian has for Israel is completely selfish and the sadistic hope that millions are murdered. How pathetic…. Again.

More importantly, the power that runs the world wants to put a RFID microchip in our body making us total slaves to them. This chip matches perfectly with the Mark of the Beast in the Bible, more specifically in Revelation 13:16-18:

“He causes all, both small and great, rich and poor, free and slave, to receive a mark on their right hand or on their foreheads, and that no one may buy or sell except one who has the mark or the name of the beast, or the number of his name.”

Now we have claims that RFID tags are now the “number of the beast”. Darn, I thought that was social security numbers, or bar codes on potato chips, serial numbers on currency or whatever failed claims that Christians have made over the years. END_OF_DOCUMENT_TOKEN_TO_BE_REPLACED

What could you do with $42,000?   Well, my former church (you can see them here. Rather a shame that they removed the piano and organ from the sanctuary) is using it to spread their nonsense in Romania.  Not that there are poor people in western Pennsylvania that need help.

They did this once before, when I was still a Christian, sending people to Australia for the same reason.  And having known some Australians, they do assure me that there are Christians there, no Americans need to bother with flying several thousand miles to come.

Now, when you read stats about Romania, in 2011, 81% were Orthodox Christians.  Adding up the various percentages of Christianties in Romania gets you to 92% or around 18 and half million people.  It’s one of the most religious countries in Europe, but a tiny church in Pennsylvania where there is a poverty rate around 40% (plus problems with drugs) just has to go over and proselytize.

Indeed, these evangelicals are sure that the Romanian Orthodox Church is entirely wrong, “The Romanian Orthodox Church claims that over three-quarters of the population are Orthodox believers, and therefore Christians. This false claim is based on their practice of infant baptism by triple immersion, followed immediately by Chrismation (anointing with oil, through which the infant is supposed to receive the Holy Spirit). The Orthodox maintain that they alone have the truth and that the teaching of all others, including Roman Catholics, is in error. For them, to be Romanian is to be Orthodox. Evangelicals are treated as sects, along with cults like the Jehovah’s Witnesses, Mormons and Children of God. Today many heretical cults are making inroads in Romania.”

It just goes to show that there is nothing good about Christianity, and most Christians just want to preen at their god to show it how pious they are and display themselves in public, rather than help their fellow man.