If you tell a lie and tell it intentionally and repeatedly, what does that say about you?   Lies are generally held to be detrimental to society and the people who tell them; stories about this being part and parcel of our fables and myths.  We have “The Boy Who Cried Wolf” as being one of the earliest examples of this type of story with more than a few modern takes on it filling the shelves of your local library.  The moral of that fable is that one cannot believe a liar even when he tells the truth and that everyone suffers for it.  All of the major religions have that their particular gods hate lies and liars.  Indeed, the only time a lie seems to have any good ramifications is when a lie is told to protect someone from being harmed by people who are also breaking other rules of society, such as when lies were told to the Nazis when people were hiding those they would kill.

For all of the pious prating we’ve been hearing from political candidates, we’ve seen an explosion of lies being told recently though and being told by those who would attempt to wield power in the United States.  There are always lies told during elections by both sides, quote-mining to misrepresent what was said, manipulations of statistics and indeed outright lies.  But it seems worse now than ever before, and these lies are told for the express purpose of restricting rights to American citizens and to scare and mislead the public so they are not able to make informed decisions.  And it seems that the Republican Party, the Tea Party and extreme religious conservatives are doing the vast bulk of it.  Considering that the Christian religion and the Christian bible has repeated admonitions against lying and liars, one would wonder, like the boy who cried wolf, are they to be trusted at all about *anything* they say? END_OF_DOCUMENT_TOKEN_TO_BE_REPLACED

Pennsylvania lawmakers are at it again.  Today, we have HB 2400, introduced by Rep. Marsico and unfortunately supported by both sides of the aisle:

Considering how much Republicans insist that government is simply too big and too intrusive, one wonders why a majority of those who have signed onto this bill are Republicans (48 out of 51).  It’s seems as long as goverment can be used to force their will on people, Republicans are all for it being as invasive as possible.   Seems like fascism is just want they want.

This bill wants the government to have even more ability to spy on the residents of the Commonwealth of Pennsylvania and to have even less oversight in doing so.  Warrantless wiretapping is just fine with the representatives above as long as someone might think a crime “might” be committed.  It’s okay with them if citizens spy on each other as long as someone has a delusion that something could occur or that they might not like the opinions of their neighbor and thus “suspect” something.  The fig leaf trying to cover this law is that an employer, the gov’t or a school just has to post a warning that they may be recorded somewhere. Shades of  Arthur’s problem with the bypass plans in The Hitchhiker’s Guide to the Galaxy:

“But the plans were on display…”
“On display? I eventually had to go down to the cellar to find them.”
“That’s the display department.”
“With a flashlight.”
“Ah, well, the lights had probably gone.”
“So had the stairs.”
“But look, you found the notice, didn’t you?”
“Yes,” said Arthur. “yes I did. It was on display in the bottom of a locked filing cabinet stuck ina disused lavatory with a sign on the door saying ‘Beware of the Leopard.'”

Now this is pathetic hypocrisy, but entirely expected from politicians.  They wish to tell us that they are for a free and democratic Pennsylvania and United States, but then they try to create and pass bills like this, and tell us its for our own good, that only the “guilty” are those who have reason to fear.  Unfortunately, they are the ones defining “guilty” and with their support of things like indefinite detention, torture, extraordinary rendition, and declaring that simply being part of labor unions, political parties, civil disobedience, etc makes one a “terrorist” at worst or “un-American” at best, we all have reason to be afraid of bills like this.

Let your representative know that you’re watching their hypocrisy and will hold them accountable by finding their contact information here.

Holy cats, this is good!   Yes, Virginia, Koko Brown Ale does taste like coconut.  One might think so with the word “coconut” repeated on the lable.  This of course seems to elude other reviewers who are “Shocked! Shocked!” that what comes in such a bottle might have a hint of coconut flavor.

I personally enjoy nut brown ales a lot so I had to try this one, again from the shelves at our local Wegmans.  I also love coconut, from smelling it as tanning lotion, to consuming Almond Joys.  And this ale tastes like an Almond Joy.  The brown ale gives it a depth to resemble chocolate plus the slight sweetness and the nuttiness to be the almonds.  Then overarching them both is the lovely taste of coconut.  Definitely could be a dessert beer, but could also go nicely with a good curry.

Unsuprisingly, Pat Robertson has advocated for the destruction of religious images that are not his own.   In a recent bit on his television show, he advises a “good Christian” to destroy the statue of Buddah that her friend has.  Now, where have we seen such destruction advocated before?  Hmmm, oh yes, that cesspool of one other religion that is sure that it also has the only “right” answers, Islam.  The “good Muslims” of the Taliban took it upon themselves to destroy ancient statues of the Buddha at Bamiyan, because they were sure that those statues were “idols” and were “evil”.  What a pair of pitiful religions lead by men, so scared of a inaminate objects, that their leaders have to show their manhood with weapons since there is nothing between their legs.

I’m guessing that Buddhism can be and is just as vile, but it’s bemusing to see such actions consistently coming from religions that insist that they are ever-so very special and that their god is something different, especially when their god is the same man made imaginary friend.

Oh and dear Pat has also attacked other sects of his religion, Chrisitanity.  Of course, he thinks that only his version is the correct one and those Episcopals are going to be “apostate”.  Pat always speaks for God don’t you know?  And gets things wrong repeatedly.  So much for his hotline to some imaginary omnipotent being.   Poor pitiful things, as always having nothing more than greed and fear to move them along.

It seems that a lot of what we drink has to do more with a interesting name or label.  We’ve been fairly lucky in doing that, only finding a few bottles undrinkable.   This was bought at the local Wegman’s, which has been our go to for sampling a lot of different alcoholic beverages.   We still hit the distributor to get cases.

Maudite  was one of those whose name was irresistable, especially for this blog.  Maudite means “the damned”, something many theists, usually Christians, are quite sure atheists like me are.   It’s a belgian strong dark ale made in Quebec, 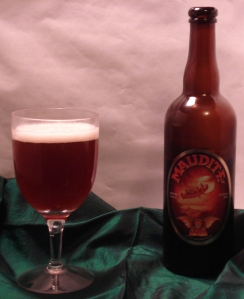 and seems to usually come in 750 ml bottles with cork and cage.  The head is nice, off-white and complements the dark brown-red of the ale well.  I rarely pour to get a big head so you won’t find them often in my photos.  The aroma is very fruity with spice, striking me as very apple cidery.    For having an 8% alcohol, it’s quite smooth and does strike me as a lovely autumn beverage.

The ale today is a kit from Northern Brewer, the Surly Cynic Pro Series Partial Mash Kit.  Surly Brewing Company is a microbrewery in Minnesota.   And OF COURSE, it was the name of the beer that got us to try the kit.

As you can see, the ale is a nice orange color, and though it looks really hazy in the photo, it cleared up nicely.  The head was quite small, but since I’m not into wading through bubbles, that’s fine by me.  The flavor is a cross between a hefeweisen and a belgian saison, and I find this to be a great ale for the summer with the bitterness/pepperiness of the hops and citrusy notes to be a good play against the often sweet seeming phenols.  We used the Wyeast 3522 as suggested though the brewery uses the White WLP550.  For a blend of old world ingredients and uppity new world attitude, this is a keeper.

what the heck does “dry” really mean?

Vintage 2009.   I see it be called “anything but dry” in other reviews.  Then what does that make my box wines?  Blocks of sugar?  Well, maybe to a point but they aren’t only sweet either.

This wine reminds of me of two things: chocolate and blue plums. 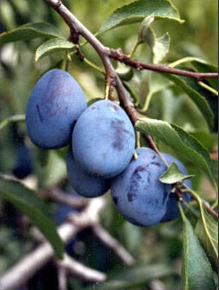 Like many children it seems that the mention of baking chocolate is only partially heard.  Mom has chocolate in the cupboard!  This knowledge encouraged me to move chairs to clamber up onto the countertop and get to it.  Ah, the prized chocolate is at hand.  And then, that first taste….. Mom lied!

But you grow up and learn to appreciate the bitterness of chocolate.  Eventually.   Add that flavor to the sweet fruity but tannic prune plums that the blues are and you have this wine.