Skip to content
clubschadenfreude What the Boss likes July 25, 2020 1 Minute

Just found out about Joe Medicine Crow.  He was a WWII vet who was also a Crow war chief.   He was given the Presidential Medal of Freedom by Presiden Obama, when the medal meant something and wasn’t given to wannbee nazis.  He was an honorable man and a total bad ass.

“After spending the latter half of 1942 working in the naval ship yards in Bremerton, Washington, Medicine Crow joined the U.S. Army in 1943.[5] He became a scout in the 103rd Infantry Division, and fought in World War II. Whenever he went into battle, he wore his war paint (two red stripes on his arms) beneath his uniform and a sacred yellow painted eagle feather, provided by a “sundance” medicine man, beneath his helmet.[3]

Medicine Crow completed all four tasks required to become a war chief: touching an enemy without killing him (counting coup), taking an enemy’s weapon, leading a successful war party, and stealing an enemy’s horse.[6] He touched a living enemy soldier and disarmed him after turning a corner and finding himself face to face with a young German soldier:

The collision knocked the German’s weapon to the ground. Mr. Crow lowered his own weapon and the two fought hand-to-hand. In the end Mr. Crow got the best of the German, grabbing him by the neck and choking him. He was going to kill the German soldier on the spot when the man screamed out ‘mama.’ Mr. Crow then let him go.[3]

He also led a successful war party and stole fifty horses owned by the Nazi SS from a German camp, singing a traditional Crow honor song as he rode off.  – Wikipedia  (donate to them if you can, I do. ) 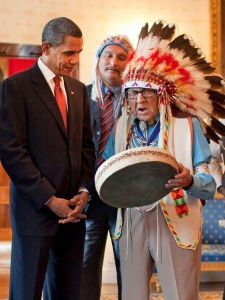