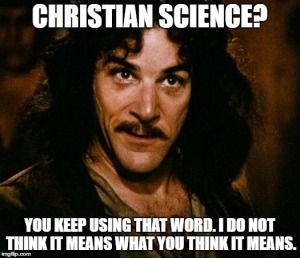 Well, this week, the Christian Scientists here in Harrisburg mailed out fliers about how they were going to have a healing talk down at their church, by Josh Niles (a supposed veteran which make me wonder why the local VA hospital isn’t empty).   There are few things I find more disgusting than theists making baseless claims on how they can heal people when hospitals are full, especially veterans’ hospitals and children’s hospitals.  The deceit that is involved is amazing for a religion that supposedly cares about the truth.

I shot them an email and asked for evidence of this healing, and why they can’t heal anyone who actually has been hurt.   They unsurprisingly directed me to the party line, and offered no reason why they haven’t healed amputees, people with documented cancers, etc.  The claim was “Christ Jesus had a remarkable healing record and Christian Science has an excellent record too.” Directly me at this “excellent record.” I pointed out that they had no evidence, and I received this in reply “You may recall that there was a multitude of sick people at the Pool of Bethesda and only one was healed by Jesus. That man was receptive to what Jesus said to him and was obedient and was healed.   The rest were “waiting for the moving of the waters”, a material approach of hope for healing and then only for some that made it to the pool.” The problem with this is that JC only talked to one fellow at the pool, who was just like the others. Why not speak to the others and heal them? And why doesn’t JC say “hey man, illness is an illusion, and only prayer in this certain way will heal you”, like the CS leader Mary Baker Eddy?

Well, how about we look at that “excellent record”?   As a background, Christian Science, aka the Church of Christ, Scientist and The First Church of Christ, Scientist,  is a sect of Christianity invented by various people and Mary Baker Eddy is the most famous of them.  She claimed that sickness is an “illusion”, is the result of thinking “wrongly” (aka blame the victim) and can be cured by prayer alone.   They also think that only their claimed spiritual world is real and that reality, this place that we inhabit is illusion.  I do have a lovely ladle of molten steel they might take a dip in if they are sure of this.  We also have the claim that CS is getting back to the “real” Christianity, a claim that many many sects make.

Incidentally, a word to advice to Christians (and other theists) who are reading this, ready to insist that CS isn’t “really” Christianity: think about how your sect compares with this one and how all of you have no evidence for your claims.  However, I will admit that Christian Science is only slightly less silly and bizarre than Scientology in my estimation ( just read about malicious animal magnetism, which is hard to distinguish from spiritual warfare, imprecatory prayer and thetans).

What is amusing about this is that the religion doesn’t say you can’t use modern medicine, but they claim that their prayers are better than it.  So, it isnt’ surprising that these are the stereotypical Christians who praise their god when it was the hard work of medical professionals who actually helped them.   Of course, they’ve managed to also murder children and kill themselves with this ignorance.  One might counter my claim of murder with claims that these people don’t know what they are doing, however, if their religion allows going to medical professionals, then they know that they have an alternative and one that works.  Either that, or they are truly delusional (delusion: a belief that is: certainty (held with absolute conviction), incorrigibility (not changeable by compelling counterargument or proof to the contrary),impossibility or falsity of content (implausible, bizarre, or patently untrue)  and should be considered as mentally ill as the next person who has delusions.  You’ll note that the common definition of a delusion has religion or culture as an out for such beliefs, which doesn’t make a whole lot of sense, other than to protect the sensibilities of those particular beliefs.

So, we have a religion that claims that they can heal, much like how evangelical Christian preachers who claim they can heal, practioners of other religion and practioners of various types of spiritual or energy healing.  We also have record of MBE making claim that she was not healed in order to attempt to seek damages from the city. END_OF_DOCUMENT_TOKEN_TO_BE_REPLACED