This weekend we stuck around the house.  Husband was on call and couldn’t do much.  Not even play his new Starcraft game. Now free from the beeper, he’s happily being a Zerg.  I cooked and we watched some shows from the premium cable channels and some favorite movies to kill time.

I’ll have to say that it’s good the shows were free since I wouldn’t bother to pay extra for them.  We watched 2 episodes of Game of Thrones.  I briefly tried reading the books and got annoyed with the characters being indistinguishable from each other.  In the books and in the show, all came off as some combination of venal, puerile and not terribly bright.  With the constant and pointless political machinations, I found that GoT to be low fantasy evidently aimed for those who like reality shows. Others certainly do seem to like it; I don’t.

I watched some of Spartacus: Gods of the Arena which is a prequel to the first season.  As always, gorgeous people killing each other and having sex.  I did find it a little less dependent on those things and having a bit more story so it wasn’t quite as repetitive.  I liked Crixus and Dottore/Oenemaus from the first season so it was nice to see more of them…ahem…and I do like a good revenge story as a guilty pleasure.  I haven’t watched any of the third and I believe final season where Spartacus does have to end a certain way.

The movies watched were Dr. Strangelove again, so I’m here humming “We’ll meet again, don’t know where, don’t know when…”  Not that it isn’t always a bit depressing to watch, but when I can see the same nonsense spouted 40 years ago by General Jack D. Ripper being repeated now by idiot politicians, I just have to sigh.

The other notable movie was “Paul”, where two nerds (Shaun of the Dead guys) pick up an alien, Paul (Grey type alien) and their misadventures.  I find it very funny, with good self-inflicted humor about nerds, some amusement at Christian creationists’ expense and just enough pathos which means very little.  Favorite line: “I’m not going to eat a *dead* bird am I?””.  Sigourney Weaver has a great cameo.

The Caesar salad recipe is from the Saveur magazine’s 150 best recipes issue.  I’ve found several excellent recipes from this magazine.  Now, I understand that Caesar salad has a built in debate about what should “really” be in it, how to do it “correctly”, etc.  Well, at this moment I don’t care because this is good enough for me.  It’s vastly better than a bottle of already made “Caesar” dressing. Also, get the expensive cheese, Parmigiano Reggiano. It really does make a difference and you can use what’s left to make Fettuccine Alfredo.

My alterations to the recipe?  They are due to me being lazy and that my husband isn’t often into eating greens.  I took the garlic, rubbed it on my bowl, then took it out, pitched it in with the other ingredients for the dressing, including the egg and put my stick blender to it until it was mostly mixed. There were a few slivers of anchovy floating around in it, which is fine with me since I enjoy the salty fishies. This recipe makes a *lot* of salad.

The pork ribs were the St. Louis style cut (a good site with diagrams here).  Generally, we use “country-style ribs”, a cut from the shoulder more akin to a pork chop, since they are meatier and cheaper but there were none to be had at my grocer.  My method is in the oven since it’s a lot easier.  I take my ribs (5 pounds this time), placed them on a bed of sliced onions in my speckled roaster and roasted for 2 hours at 300 degrees F(149 celcius) with the lid on (you could use any baking dish and aluminium foil here too).

After 2 hours, I remove any excess fat (spooning it out seems to be easiest) and pour in the bbq sauce. I occasionally make my own but we like KC Masterpiece Hot and Spicy and don’t feel the need to reinvent the wheel every time. I roast the ribs another hour covered, and for the last hour (4 hours total here) I remove the lid to allow the sauce to cook down and cover the ribs nicely in a “bark”. They will fall off the bones so be careful when maneuvering them.

The accompanying mashed potatoes are nothing special, just potatoes boiled and drained, with butter and milk added and then the hand mixer applied vigorously.  I supposed they should be called “whipped potatoes”. 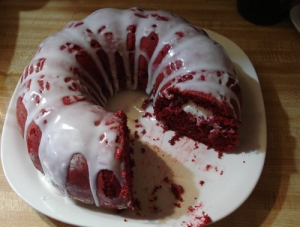 Last, red velvet cake, an American oddity that is a barely chocolate cake with red food coloring.  I’ve made this from scratch before, like the one here, but it can be a pain since it requires some curious ingredients, like a *bunch* of red food coloring, buttermilk, etc.  So, I found the Pillsbury red velvet Bundt cake mix.  Being children of the 70s and 80s, the husband and I like Bundt cakes, with their odd shape and filling.  Would love to find a copy of the old chocolate Bundt cake with coconut filling.

This mix is pretty good.  The cake is nice and moist (I love those ingredients you can’t pronounce but make cake moist for an unnatural length of time), and it filled my Bundt pan well.  I got the filling to center well, using a small scoop/disher to place it easily.  I wasn’t that fond of the filling though. It’s pretty much frosting; I was hoping for a more dense cheesecake type filling.  For the top, I just made a basic glaze, ¾ c confectioner’s sugar and a tablespoon of milk.  If the glaze is too thick, add a teaspoon or two of milk.  Be careful, it’ll get too runny if you add too much.

BTW, the red food coloring *can* survive the digestive tract.  Don’t freak out.  🙂

Next up, the new beers we’ve tried.