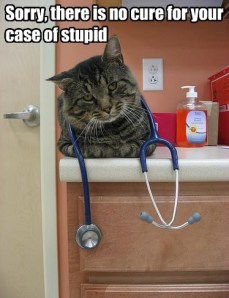 The movie for this week is Sharknado!  No, no, I can’t even joke about that.  What a purely stupid movie (yes, we watched about 15 minutes of it).  Ah, if someone would have told my teen-age self that there will be a channel called the Science Fiction Channel and that I would hate it with a passion, I would never have believed them.  The Syphy Channel is just that, a diseased thing, a graveyard of washed up 80’s pop stars who have not aged gracefully.

Okay, after this there will be spoilers. So consider yourself warned!

What we saw was “Pacific Rim”(IMDB about it) and it was AWESOME!  Kaiju, giant mechs (they’re called jaegers but I grew up with calling all giant robots “mechs”), what else could a smart savvy nerdy girl want?  And a strong female character who wasn’t a love interest.  Hurrah for Mako!  I have to say, it takes a moron to give a movie like this a single star just because it wasn’t Shakespeare or some gawdawful “meaningful” chick flick.  It’s a freakin’ monster movie that has appealing characters, no slow spots and delivers *exactly* what it is supposed to. So, screw the supposed “reviewers”.  Go see it, it’s FUN!  I spent many a Sunday morning watching kaiju movies on the local TV station.  It was always a lot of whining when I wanted to stay and watch Godzilla or Gamera and my parents thought I should go to church. (hmmm, Word recognizes Godzilla but not Gamera   🙂   )   Added:  Incidentally, this movie is LOUD.  I’m a bit deaf in both ears from old ear infections and I still stuffed tissue in my ears to reduce the noise to bearable levels.

Ron Perlman has a great bit part and I sniffled through the very well done and still manly 🙂   goodbye scenes.  They did a fabulous job at making the jaegers and kaiju seem huge and heavy.  I did love how they did not make them fly but had to have heavy lift copters lift and fly them to the battle.  The movie even treated scientists well.  The fish flopping scene at the end is one of those good “wait for it….wait for it” scenes.

Food for this is strangely apropos for not being planned that way, being breaded flattened pork, a part of Jaeger Schnitzel (the cutlets with a brown mushroom based sauce) and also tonkatsu, a breaded port cutlet in Japanese cuisine.   My husband has dubbed it spanko pork since it needs to be beaten.  Incidentally, the wiki article on this has that “hamu katsu” is a version with ham.  Since we like Spam, we may end up with “spamu katsu”.

The recipe for this is very simple. Take one pork tenderloin.  Cut into 2” chunks, pound flat on the cut end so it is tender (pretend you are a jaeger pounding a kaiju) to about a ¼ inch.  Heat oil (about ¼ inch deep in skillet until a crumb of panko frizzles in it.  Then coat pork with flour, then egg wash and then panko.  It should take about 3-5 minutes per side to cook to a golden brown.

With this we had homemade apple sauce and what is known as “german potato salad”.  The apple sauce was three Honey Crisp apples, a ¼ cup of sugar, ¼ cup of water and a teaspoon of cinnamon cooked over low heat until soft and mushy.

“German Potato Salad” is a strange but tasty thing.  This is from western PA (recipe is in most church cookbooks from the area) and how I grew up making it.  It’s a bit different than real German kartofelsalat.   Here’s the recipe I used.  This is from the 1993 Immaculate Conception cookbook that my mother-in-law gave us, though I have doubled the sauce component.

6 medium potatoes cooked and sliced or chunked (I’d suggest using Yukon gold or regular white potatoes in this. Russets break down too much)

12 pieces of bacon chopped and fried (reserve bacon fat.  Thick-cut bacon is great in this)

Fry bacon, remove when crispy.  Fry onion in bacon fat until golden.  Add flour to onion/fat mixture, mix well and cook for a few minute to get rid of the raw flour taste. Add sugar, salt, celery seed, pepper.  Mix until smooth. Then add vinegar and water. Cook until thickened, stirring continuously.   When thickened, pour over potatoes. Stir in crisp bacon.  Serve warm.  It seizes up completely when cold thanks to those tasty saturated fats.

Yep, one more recipe to remind me why I don’t have a gallbladder anymore.

We had Sly Fox Royal Weisse beer with this.  It is from near Philadelphia, and is quite good.  It comes in cans and tastes like a mildly flavored hefe-weizen.  It went well with our rather Germanic meal.

Postscript: there’s a Make your own Jaeger app: http://apps.warnerbros.com/pacificrim/designer/us/?language=en-us