Skip to content
clubschadenfreude from the kitchen August 15, 2013 2 Minutes

This post is to catch up on what I’ve been cooking.   We did watch a movie this weekend with a meal, but it was the Brain from Planet Arous, a classically bad movie but one of the first, if not the first, that had aliens taking over human bodies.  Something that appeals to my Trekkiness is that they used the same effect of reflective eyes in this movie as they used for Gary Mitchell and Elizabeth Dehner on “Where No Man Has Gone Before”.

I was craving a pineapple upside down cake, a old classic.  There is a way to make it in various pans, including cast iron and in an electric skillet, but I used two regular 9” round cake pans, just splitting the brown sugar, butter, pineapple and batter between them.  The idea was to make two so we could eat one and freeze the other for later. Both got eaten before that happened.   The recipe is from the Betty Crocker website.  I used the Betty Crocker Super Moist Yellow Cake Butter Recipe boxed cake mix. I also replaced all of the water with the pineapple juice from the can.

One danger with pineapple upside down cake is that the pineapple can tend to remain in the pan after you invert the cake.  Make sure to give it a good rap when flipping it over onto a plate.  And if the miserable things don’t come out, just lift them out with a fork and replace them on the warm cake.   I did not use maraschino cherries since I don’t much see a point for them.  And yes, it means more brown food on my blog.  The cake was wonderfully moist and tasty. 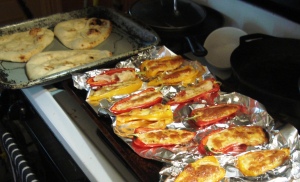 For something new for supper, I decided to experiment with peppers and crab.  There were some lovely little miniature sweet peppers in the produce section so they got grabbed up.  I also grabbed a container of crab cake mix (made with fake crab aka surimi which seems to be much better than I remember it to be) and a block of pepper jack cheese for some heat.   I split the peppers, deseeded them and stuffed the crab mixture in.  A thin slice of pepper jack went on top and everything went into a 375 degree oven for about 40 minutes to cook the peppers well.  I had a package of naan, so that was used to corral any juices.  For an experiment, it was quite tasty.

Oh and we got a new coffee pot. We had a nice Bunn drip pot (the same brand that you’ll see in most diners) but it gave up the ghost. So my coffee loving husband said he really wanted a Keurig, the machine that uses the little cups.  I will have to say that it’s a cool little machine and it’s worth getting the inserts so you can use your own coffee.