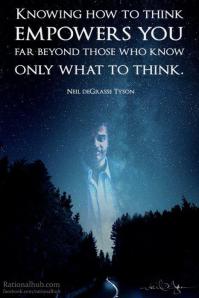 I was going to do a blog post about the myth of the “war on Christmas” that is so popular this time of year.  However, it’s just low hanging fruit, since one can see that there is anything but a dearth of Christmas celebration and awareness in December.  On my way home to visit my parents this past week, I was inundated by Christian radio stations, and wondered how many there are in the US.  One source, christianradiolist.com, has 1420 stations listed.  Other lists have fewer but they seem to only consider those who agree with them as TrueChristian radio stations, not surprising at all.

So rather than yet again point out how silly the “war on Christmas” claim is, I thought I’d address another one of the Billy Graham Evangelistic Association’s newspaper columns.   This one amused me because the title that accompanied it was “Those who doubt God should seek answers.”

The column starts out with the usual letter of inquiry. Today it was from a freshman college student who has doubts about the religion that they were raised in. Z.B wants to know how to tell their parents that they don’t go to church anymore.

You may already see where this is going.  Oh the horrors of a college education where you’ll be taught to question things you’ve been told are true!

“Billy” is right, college is a place where you encounter questions you’ve never thought about even asking.  Any place beyond where you grew up, college, military service, travel, volunteering, is a place where you encounter such questions, when you meet people who are different than you and where you meet authority figures beyond your parents, your grade school and high school teachers and in a theist’s case, your pastor/priest.  A student suddenly realizes that they aren’t the center of the world and that their beliefs aren’t held by everyone.

When I went to college, my first college was a women-only college (it has since changed).  For the first time, I had the chance to talk to people who had skin darker than me.  My friends were Jewish, Christian, Wicca, and Muslim.  And that was an eye-opening experience for a gal from very very rural, very very white and very very Protestant western Pennsylvania.  (yes, I was 18 before I talked to an African American person… sigh).

Billy wants to chalk up this doubt to social pressure and homesickness.  It’s those bad “other” people who are at fault and it is simply a weakness to doubt what you’ve been told.  Billy asks Z.B: “What are you doing with your doubts? Are you seeking answers to them or are you content to let them take root in your mind and soul?”

Billy says that it’s easy to “enjoy” your doubts.  Really?  Seems like Billy has no idea just how hard it is to have doubts about something that was or is still very important to you.  Shucks, it’s just easy as pie to throw away something that you’ve believed in for years.  In reality, it is not and most if not all atheists who were theists will tell you exactly that.  Billy says that not going to church allows doubts to grow.  Unfortunately, going to church does nothing to alleviate doubts.  How many atheists still go to church to make those around them happy?  We even have pastors who still preach and who have become atheists, so we know that simply going to church does nothing to help.  Billy seems to count on the same thing that other religions, including cults count on, and that which he decries, social pressure.  Everyone claims to believe so why not you?  Social pressure can be very powerful; in its most virulent form, it is bullying.

Reading further along in Billy’s answer, we have claims of how doubt will not “lead you to the life that God has for you.”  Which seems throw out the idea of seeking answers and honestly seeking them, not looking only for confirmation.  Per Billy, the only “right” answer is that which leads Z.B. to Billy’s version of Christianity, and what Billy believes that this god has in store for Z.B.

We also get to see the repetition of a common theist apologist reason for why one should believe in their religion: “Some of the greatest minds in history have been believers.”   In Billy’s case, he is of course referring to Christianity, because “great minds” can’t possibly believe in anything else but that.  The problems with this classic appeal to authority are many:

1. How does one define “greatest minds”?  Those who agree with the theist in question?  One smart in one field of knowledge?  One common name invoked by Christians is Isaac Newton, the great mathematician and physicist (d. 1727).  Because Ike was a Christian, the argument goes, then everyone should agree that Christianity is the one true religion.  However, this displays an ignorance about Newton and the common desire to recruit any authority as agreeing with the theist.  Newton was also very interested in alchemy. Per the argument from authority above, this would also mean that alchemy is as valid as Christianity and should be pursued with as much fervor.  Newton was also very interested in the Comma Johanneum, a verse in the bible that is one of the few possible references to a “trinity”, a root of Christian faith.   Newton thought the bible to be corruptible, and that does not agree with many Christians’ opinions about the book.  In this and other ideas,  he would not be considered a TrueChristian by many of those.  Indeed, it appears that Ike was pretty sure that the Roman Catholic Church was the “anti-christ”.  That’s at least one rather large group of TrueChristians he doesn’t agree with.

2.  Another “great mind” who is often brought into the fray is Albert Einstein.  Poor Al, he always gets touted by Christians as someone who is smart and who supposed believed just like they do.   Like Ike above, Albert seems to have an idea of a cosmic force, perhaps with a little bit of personality, that has set the laws of physics in motion and little else.  Again, to invoke him as a “great mind” that believes like Billy is ridiculous and untrue.  The Deists seem to have the best claim to him, since he was also not an atheist it seems.   Incidentally, Einstein seems to have bought into the idea that atheism is mostly from being emotional, not reason.  Silly, but even Al can’t always be right.  🙂

3. And all of those folks who weren’t Christians at all but who were indeed very intelligent.  Ptolemy, Muḥammad ibn Mūsā al-Khwārizmī, the guy or gal who came up with this 1200 years ago,  Eratosthenes, etc.

Yes, Billy says “some”.  But it is no secret that he would not accept the “truth” of Zeus or Allah because of the belief of “some” intelligent people in those gods.

In closing, along with the usual baseless claims that God and JC are real *honest and for true*, Billy says that Z.B’s parents might not understand everything that Z.B. feels but it would help if Z.B. would “honestly” seek answers.  And the only honest answers to Billy are those that confirm that Billy is right, just like so many theists who have commented on this blog.

Billy quotes Colossians 2, where Paul claims to be the only one who is the TrueChristian.  Just like  Billy, he didn’t want anyone to listen to anyone else or to ask questions, claimsing that all treasures of wisdom and knowledge are in this god, and then goes on to say “slavery is okay”.  So much for all of that “treasure” eh?   Many ex-Christians start by asking questions about such things like this; Z.B.’s questions could have started right here.    And all a Sophisticated Theologian tm could offer is what you have seen.  It’s not the fault of college that the excuses of religion fail.  It’s the fault of the religion.

(just a postscript:  I was looking around the web for TrueChristians who are sure that Billy is wrong, and I found this website: http://www.atruechurch.info/graham.html Poor Pastor Fish, a good TrueChristian, who is sure that he’s right, Billy’s wrong (and all of these people are wrong too)  and has been saddled with the first name Darwin.  Yes, a TrueChristian with the name “Darwin Fish”.  : )  Hmmm, with this site, maybe Pastor Fish is a Poe…)

5 thoughts on “Not So Polite Dinner Conversation – those who doubt gods should seek answers… whoa, only the ones Billy approves of!”