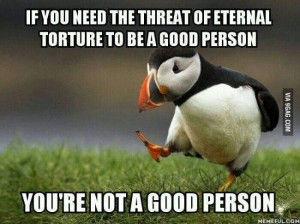 A research report “Morality in Everyday Life” was featured in the September 2014 issue of Science (this is just the abstract, there’s a fee to read it in its entirety). This research demonstrated that religious people and non-religious people did not differ in the number of moral acts that they did And of course, this sent the theists into a tizzy, because a common claim is that no human can be a decent moral human being without some magical being to enforce this behavior by promises of reward or punishment after a human dies. I’ve had more than a few Christians tell me how horrible a person they would be/were if they didn’t have their god requiring them to be decent so they can get their magical prize in the afterlife. (One can read more about the study in some articles at the NYT, a blog about empirical research on morality, the Daily Mail article mentioned below, and a pdf of an article from one of the participating universities in the study. As always, this study is not the final word on such things, until it is supported by more research.

Now with that as background, you’ll understand more as I address an article from the Pittsburgh Post-Gazette claiming that the religious have one up on the rest of us because religion is a moral “safety net”. This is by a fellow named Tom Purcell, a conservative who has been featured on such lovely things as the Rush Limbaugh show (one of the more verminous conservative liars in the US), the Laura Ingraham show (a woman who subs for Bill “I have no idea how tides work” O’Reilly on Fox News, and why yes, she *is* blonde and finds homosexuals e.g. “sodomites” and feminists abhorrent. Well, she does think that homosexuals should have some rights now just like so many conservatives who suddenly have an out family member.)

So, what does Mr. Purcell have to say? Well, boiled down, it comes down to a grudging acknowledgement of the study but a baseless claim that religion somehow “helps” having morality, even though the study showed that it did not. Unsurprisingly, this is another example of how a type of theist will do anything to ignore reality in favor of making false claims to shore up their religion. It isn’t only creationists…

In this study, the researchers reviewed the acts recorded and assigned them as they related to six principles related to morality: authority, caring for others, fairness, liberty, loyalty and sanctity, which I assume must mean the dictionary definition: the quality of being worthy of worship.   Again, the research says that religion has no impact on acts based on these things. All the research came down to is that theists may feel more positive emotions when doing/observing moral things, aka “I did good so I feel good. I see someone doing good, I think they should be rewarded.” and more negative emotions when doing/observing immoral things aka “I did bad so I feel guilty. I see someone doing bad, I think they should be punished.”

After reviewing the study, Mr. Purcell says “It is certainly true that nonreligious people can be principled and that regular churchgoers can be crooks in their business dealings.” Here seems to be the usual claim that not all Christians are “TrueChristians”, with the attendant circular argument that TrueChristians are Good are TrueChristians, etc.

Mr. Purcell argues that “many religions people” have a framework and community that helps them lead “more” moral lives. Which is again not supported by the evidence presented in the study. He claims that religion gives theists a “methodology”, that allows them to decide what is moral and what is not, what is “good” and what is “bad”. This is a problem since many things that are god-approved and deemed moral in the various holy books are seen now as very immoral and bad. This shows that religions are no objective way to know what is moral and what is not and thus, this “framework” is not to be trusted at all. This lack of any special powers of religion also jibes with the evidence that there is no difference between theists and non-theists when it comes to actions.

Mr. Purcell mentions that Greek philosophers had names for what is good: prudence, temperance, etc. They did indeed, and again it shows that no particular religion has anything special about it. The ancient cultures, from Greek to Chinese to Egyptian, were talking about morality long before any Abramic religions were around. The idea of the “golden rule” was nothing new.

It comes as no surprise that Mr. Purcell is a Roman Catholic. It also comes as no surprise that the Roman Catholic Church has changed its mind on what is good and what is evil repeatedly (as have most, if not all, other religions). So, again, there is no reason to accept any religion as a framework to tell one what is moral and what is immoral.  As he says “We Catholics have a lot of guidance to help us navigate what is moral and immoral.” They do, not being sola scriptura as Protestants are, but they are no more likely to be moral than anyone else. They have gone to being sure that unbaptized children were deserving of their hell (St. Augustine, whom a Catholic will pick and choose what they want to claim he was right on) and burning unbelievers at the stake to inventing a less bad area “limbo” for “virtuous pagans” to declaring that well, other religions and maybe some unbelievers are good too. What a failing of a supposedly omnipotent and omniscient deity. 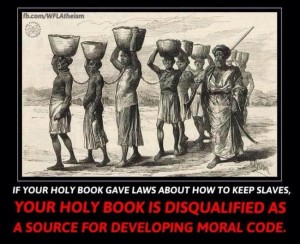 He claims that the Christian Bible is a font of instruction on how to tell what is moral and what is not. And anyone who has ever actually read it knows better. This bible says that slavery is fine, that killing an unbeliever is fine, that giving young girls as war prizes to men and the temple of this god is fine, that killing homosexuals is fine, that killing someone for working on the “Sabbath” is fine, etc. Are those moral acts? All of these commandments are just as god-given as the first ten, which so many Christians, and non-Christians love to point to as moral rules (Purcell cites George Will as one, Will who is an atheist.) The author of Exodus never spec’d the first ten out as anything special, that came much later.

Purcell also claims that religious people have “coaches” who can interpret on what this god of his really wants us to do and not do, which again changes from coach to coach. We have coaches who claim that homosexuals are evil and deserve to die and coaches who say that they are completely okay according to their god. Which coach shall we believe, when they both say that they are TrueChristians and say that their source is the bible? It’s like one coach says to swim the butterfly stroke with one set of movements and another claims a completely different set. Which is right? Well, we don’t know since no one can show that their version is the right one. No one is willing to take the altar test. (oh and I’m pleased to report that the prayers promised by Bill Keller,  self-proclaimed TrueChristian and prophet of God and his minions have yet to take effect.  Such a pity. 🙂 ) 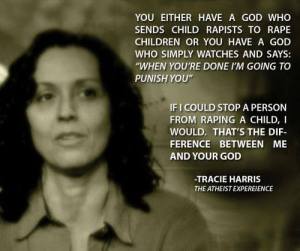 Finally, Mr. Purcell cites Fiery Cushman, Harvard U. moral psychologist, who says that the study is weak in that it is based on subjective assumptions, that the participants may report their own behavior depending on how they view themselves.   That it could and that is a weakness in religion also, for there is nothing to indicate that believers do not do the same thing, to the point of creating their god in their image with their desires and hatreds. Dr. Cushman also is quoted in saying that this study supports what is found in the lab. Mr. Purcell doesn’t find the issue complicated though. He is sure that “we all long for beauty and detest ugliness. We long to become good and root out evil.” Unfortunately for Mr. Purcell, his definitions of good and evil, of beauty and ugliness are not objective or universal. What a Roman Catholic finds good e.g. something commanded by their god in their bible, another will find evil because they find to be something that they do not want done to them or theirs or anyone else, e.g. empathy.

He ends with making a classic appeal to popularity fallacy. He thinks “many people who practice their faith have a slight advantage at being more moral by being part of something much larger than themselves – a community that is struggling to do good and avoid bad.” Wow, again nothing supports that at all and telling the old lie that only religious people can do good and define good.

Too bad that the study and the evidence says that what he “thinks” is wrong.  The score so far?  Reality: very high number so we’ll go with infinity – Religious believers: Zero 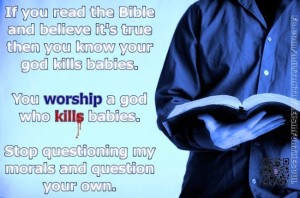 2 thoughts on “Not So Polite Dinner Conversation – Study has evidence that religion does not make one more moral. Theist shakes his head furiously, hoping that equals evidence”