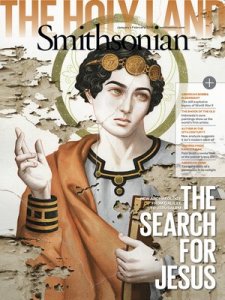 Just got my latest Smithsonian magazine. I have a particular fondness for this magazine, being one of the first I got when I was a kid in the late 70s. One of the first issues had the shots of Io’s volcanoes from Voyager 1.   About a decade later, I got an internship at one of the Smithsonian’s museums, the National Air and Space Museum. Very cool and I’ll never forget it or the folks who I worked with there.

This current issue, January/February 2016, has as the front cover a title “The Search for Jesus: new archaeology from Galilee to Jerusalem” with a very nice, if fantastical, picture of an artist’s rerendering of a 6th-7th century image of a beardless man from a cave in Egypt. Perhaps the original painting has more information to ID it as Jesus Christ, but I don’t see much reason to in what is presented in the magazine. Inside the magazine is a considerably less breathless title “Unearthing the World of Jesus”.

I do understand that magazines are business and they do have to make money, which I am sure is the reason behind the cover being the way it is; the magazine also contains a full page ad about how patriots need to buy survival food, unsurprisingly right across from part of the Jesus article. However, my respect for the magazine has gone down hill rapidly and that isn’t a good thing when this issue also announced that it was my last unless I renew. There are some very good articles in this issue, about the continued existence of unexploded ordinance in Germany thanks to WWII, some of the earliest cave paintings, how autism may not be a new thing, and a touching story about a WWII veteran in his twilight. To renew or not is the question, can one bad article turn me off of what is generally an excellent source of information?

The article is written as if the story about Jesus Christ is unquestioned historical fact. The use of may and might are so sown throughout the article that it reads like something from any gossip rag or like a show like Ancient Aliens. For a magazine that has excellent journalism and excellent research, I find this extremely unusual and largely inexcusable.

For example, the claim that a site across from the modern town of Migdal is Magdala and Magdala *is* the hometown of Mary Magdalene. It may indeed be Magdala. This is not evidence that Mary existed but evidence that a character was claimed to be from there. That a synagogue was found there is interesting and is evidence that Jews existed there but that was already known. There is a claim that there is a “possible” site for Jesus’ trial that aligns with the description of Herod’s palace on the gospel of John but strangely enough, there is no description of Herod’s palace in that gospel, the only words about Pilate’s palace and the only description is that Pilate went in and out of it, then going to another place to judge him (the gospel of Luke is the sole source for the trial by Herod). There is also claimed the usual inscription about Pilate which shows that there is a difference between what the bible claims and what an official Roman inscription claims.

A more interesting thing is that a small stone block (size of a “toy chest”) carved with imagery from the Old Testament was discovered. The article claims that these images are symbols associated with the temple in Jerusalem. They may be also associated with that, but they are also easily found by just reading the Torah/Tanakh, so it’s not terribly strange that a Jewish person would know them. There is little reason to think this block is a miniature version of the temple, though it may be, and less reason to think that Jesus Christ put a torah on it and spoke from it. Chariots of fire existed in other mythologies so it’s not too surprising that Jews had the idea too, and that later Christians would use the same imagery, blending Christ with the sun god of the area they were in, Rome in the 3rd century. In the article, there is one very odd comment about this block, that there is question about what material it is from,

either limestone or quartzite and the analysis isn’t complete yet (the stone was found in 2009). Now, if you are familiar with geology, quartzite is metamorphosed (changed by pressure and heat) sandstone. It’s very very hard and durable. Now, limestone can be hard but not nearly so hard as quartzite. It’s also mostly calcium carbonate, which is easily identified because it will dissolve in acid. Why there is any question what this block is made from 6 years after the discovery makes no sense at all. It also makes me very much concerned when the Israel Antiquities Authority has given exclusive access to this block to one person, an art historian that claims that most sculptors didn’t use quartzite and that isn’t terribly true, considering how many of them were made by ancient Egyptians.

A timeline is presented, with images of various items that are claimed as evidence for the Jesus story. What they are is evidence that there were Jews, that people were buried and that people were cruxified, and that Herod had a place to live; it also presents ‘when’ JC lived. To present this information under the aegis that this is evidence that Jesus Christ, Son of God, existed, is poor research, and unfortunately similar to the excuses apologists offer.

And those apologist excuses are also to be found in the article itself. There is Mark Chancy, “religious studies professor of Southern Methodist University”, who says this “He wasn’t a political leader, so we don’t have coins, for example that have his bust or name. He wasn’t a sufficiently high profile social leader to leave behind inscriptions. In his own lifetime, he was a marginal figure and he was active in marginalized circles”.   These are claims that don’t quite track with that the bible claims about this character, that Herod knew of him and was “greatly pleased” (Luke 23)to see him in order to see a miracle, that multiple times a legion’s worth of men, plus women and children followed this man around.

Craig Evans also makes an appearance. Evans is a New Testament scholar, from Houston Baptist who has debated Bart Ehrman, also a New Testament scholar, about the historicity and veracity of the New Testament. He says that the most impressive gain of historical Jesus research is “a renewed appreciation of the Judaic character of Jesus, his mission and his world.” Hmmm, finding that Jews are Jewish is something you have to renew your appreciation for? The article is somewhat redeemed by stating that the current research does make the character of Jesus have to be more Jewish and does not support the claim that JC was out to convert everyone as Christians would claim. In my research about Evans, I have found the debates he has had with Ehrman (2012, and 2011) and a review of one of them.

The article ends with the Catholic priest who wants to build a Christian spiritual center in Israel whose construction was halted with the discovery of the synagogue “We didn’t find any evidence yet that says for sure Jesus was here.”   He goes on “To have scientific, archaeological evidence of Jesus’ presence is not a small thing for a Christian. We will keep digging”.

For all of the protestations of how religion is all about faith, it seems that is not quite enough. Articles like this are trotted out all of the time, and there is still no evidence that the myth is true.

Postscript – lest anyone be curious, I don’t believe in an historical Jesus Christ Son of God. I believe that there could be a kernel of truth, that there was a itinerant rabbi who thought he was the messiah, and there is evidence that this was not uncommon to happen in Palestine at that time, but there is no evidence of this one person. I find the whole thing to be legend. There may have been a big strong guy who claimed he was the son of Zeus but that’s no reason to believe it.  BTW, I did renew the subscription and wrote a letter to the editor.

132 thoughts on “Not So Polite Dinner Conversation – myth, fact and what should be presented in a magazine about science and history”