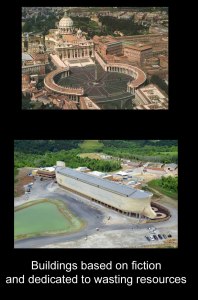 Most folks have seen the news stories about the exemplary idiot Ken Ham and his boat shaped building that he has built to supposedly show how true Christianity is. We also have one more large, useless, and somewhat pretty building built to support flagging faith. Now, where in the bible does it say that this is a good idea, wasting resources on this type of thing? Oh yes, in the Old Testament, where God had to have tons of gold, precious jewels, fabulous fabrics, acres of leather, etc. Funny how we went from that to a supposed god that insists that one should not put up treasures of the earth and then right back to conspicuous consumption. How many meals would $100 million dollars buy? How many homes would it repair? (Jimmy Carter visited the thing. I wonder how Habitat for Humanity could have used those funds) It seems that some Christians have no problem in spending thousands and millions of dollars for publicity. (still waiting for word of the donation of the subway gift cards by Ray Comfort).

As has already been noted, the construction of the building amply demonstrates that the bible is nothing more than myth because even poor ol’ Ken couldn’t build it like his god said to and surely Ken has God on his side, right? Of course physics overules imaginary gods and wooden pegs. There was a reason that boats back in the Bronze Age never even approached the claimed dimensions of the bible ark. Humans are such size queens.

The further problem with the silly flood myth is that even Christians can’t agree on the details surrounding it. If one Christian can’t convince another, why should anyone else believe claims that have no evidence to support them?

For instance, did the flood happen at all?   Some Christians are that the words in Genesis are a literal recording of an historical event aka Ham and the other literalists. Some are quite sure that they are simply metaphor, no different from any other just-so story told to explain why humans can be harmful by any other religion. Some also try to claim that the flood was just a localized event often citing the flooding of the Black Sea (a possible date is around 5000 BCE) or perhaps even the opening of the Mediterranean. However that is a problem since the bible’s description certainly isn’t aligned with those events.

How did the flood happen? Well, we have at least four that try to use science in an attempt to make the myth palatable to modern minds e.g. it was a comet, there was miles of water held above the earth in a “vapor canopy”, there were vast quantities of water miles below the earth’s surface, the seas boiled from runaway subduction. Of course, there’s always the old stand-by, magic.

When did the flood happen? Well, again, Christians don’t agree and often won’t even dare answer such a question since that would pin their nonsense down. Answers in Genesis makes the claim of 2348 BCE, creation.com has 2304 BCE (not a terribly far of answer but remember this is from people who claim to get their answer from the same inerrant source), 3000 BCE from the Christians at biblearchaeology.org.   From above, we have the possible flooding of the Black Sea dated at around 5000 BCE. So, we see that counting in the bible doesn’t give a consistent answer, and there is no evidence that a flood as described by the bible ever occurred.

By the way,  donate blood.  I’m off to the blood donation center tomorrow.  Working on my seventh gallon!

22 thoughts on “Not So Polite Dinner Conversation – so now we have an ark that can’t float, for how many millions of dollars?”