Skip to content
clubschadenfreude from the art studio, from the bar, from the kitchen, Uncategorized November 30, 2018 2 Minutes

Sorry for the long hiatus. I am dealing with a job I don’t like, and working on my art, which I do like.

I’m now an officially paid artist! It’s very weird feeling for someone who hated art teachers in elementary, high school and college because the ones I had didn’t teach art, they just had class pets who could do art and ignored the rest of us. There is, I think, the idea of some innate talent but you have to be taught the rest. In a week, I’m doing another show.  This is the cheese plate that sold (the white is from the reflection from the resin on it)

Lately, we’ve been trying a few new things to cook and drink. I finally cooked the last bit of game meat that I bought from D’Artangnan, a duck. It was very good, but they are indeed greasy. I think ours could have used more pricking of the skin to release more of the sub-q fat and a little longer in the oven. We had it with sweet potatoes and carrots that roasted in the fat. I just recently made a quick hash of that in a skillet to crisp it up some. Here is the duck. They are quite a bit different in physiology than a chicken. 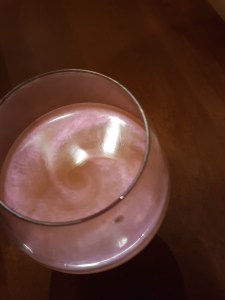 We also had some shimmery wine. We got this at the local ren faire, the PA Renaissance Faire at Mt. Hope Winery. They mixed whatever makes liquids like Viniq shimmer (finely ground mica?) with pink Catawba wine and made fairy wine. You can’t quite see how nice it looks in a still photo. Here’s a video of Viniq.

This weekend we’re making yet one more roast chicken when my folks visit. It’s kind of an early xmas, late thanksgiving thing. I’m going to be a sneaky daughter and given them a bible as a present, one not the hard-to-read KJV, and with large print and the apocrypha. I wonder if my dad, who bet me all those years ago I couldn’t read it the bible, will do it himself since he has found he likes reading. He used to always give me such a hassle when I was a young bookworm. Go play outside! Go play with your brother!

Now he knows what its’ like because I can’t resist teasing him.

We also adopted two friendly feral cats.  A huge black one had been hanging about and I got him to like me.  There was also a smaller gray and white one who seemed to get along with him well.  So we brought both in.  The black cat is called Tez, short for Tezcatlipoca, and the other is Aggie, short for Agamemnon, also called Roomba because he loves to roll around on the floor and collect any crumbs.  We have decided to always call our cats aggressive names because those ones all turn out sweet, and the one we named Muffin is the hellion.  She is about 15 now and has screeched at and cowed the the new boys (well, they are neutered).

8 thoughts on “From the kitchen and the bar: duck and wine”