Here I am again, trying to catch up on some blogging.  I’m going to try to post much more often though we’ll see how that works out.

Let’s see, what’s been going on at the Club:

The kittens have grown quite a bit.  They don’t often meow, but they trill at us and each other constantly.  Happily, one did that in bed this morning because I mis-set the alarm clock and we would have been late for work.   We got an excellent cat tree for them, by Feandrea.  We got ours through Amazon.  We’ve also discovered hat they really like dirt.  They were born under a shed on bare dirt and they managed to get into our basement which is half cemented and half an open crawlspace (our house is old).   They get their white fur quite gray since they just love

sleeping in the dirt.

I made a pumpkin pie from scratch and then one from a can of pumpkin puree using Libby’s “new-fashioned” recipe on the can.  Both were good, but I think I like the one from the can better. It’s very fluffy and easier since rather than using sugar and milk, you use a can of sweetened condensed milk (something I also enjoy in my coffee).

A neighbor’s house caught on fire this past weekend, so be careful with portable heaters everyone!

We made Northern Brewer’s Honey Weizen beer.  It’s very nice, with a whiff of honey.  The next up will be the Koa Coconut Porter.

I’ve been playing with epoxy resin and my alcohol inks and did a show a couple of weeks ago.  I’ll be doing another for a fundraiser for a local homeless shelter. Yep, it’s a Christian mission, but they do good work for folks who have nowhere to go.  For all of the churches around here, they don’t support the shelter as you would think and it has to ask the whole community.

Finally got cold enough here so I can use my beloved weighted blanket.  😊

We also put up a Christmas tree.  I had been wanting one for years but hated to waste the money.  Then I managed to get a tree on sale after last Christmas.  What I didn’t intend is having so many cats with the tree. However, they have been really good about not bothering it.  Of course, everything on the tree is unbreakable. 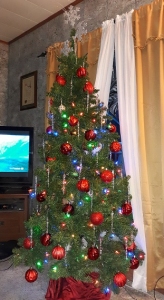 Well, that’s enough for now.  I’ll be back to my usual commenting about food, religion, politics and more in the near future.