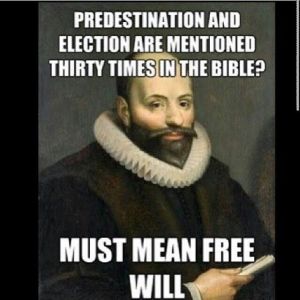 I’ve been chatting with a pastor here.  It’s about free will and this is a good succinct discussion showing how free will fails pretty quickly for Christians. I’m expecting this all to vanish on his blog.

Here’s how things have been going (the pastor’s quotes are in italics):

“exactly how is it just to kill a child for the actions of its parents?”

“I thought you might try that one. There is a problem with it. If good and evil are objective, and Christians claim that their morals are objective and come directly from this god, how is it that a human killing a child for no fault of their own is evil and a god doing it is good?

It seems you have a morality based on what something is and not the action. I’ve seen that in a lot of Christians, that they claim that this god can do anything it wants with its creations. That is no more than might equals right.”

God has a purpose for everything He does.

“that’s an excuse, Aldtric. How does free will for David’s son work when your god’s “purpose” eliminates it? Your claim of free will doesn’t work if your god can always deny it.

Add that to the fact that your god doesn’t support free will and it seems you’ve invented your own version of Christianity.”

His purpose doesn’t eliminate it. We still have to chose to pursue it. OUR God doesn’t force us to do anything. God knows what we will chose, but the choice is always ours. God used Judas for His purpose because of his choice to betray Yeshua.

“It does eliminate it. how does a dead child pursue its free will?

Your god has removed any choice at all from this dead child. Your god repeatedly forces people to do things. Joshua 11 is a great example. Shall I quote it again? “20 For it was the Lord’s doing to harden their hearts so that they would come against Israel in battle, in order that they might be utterly destroyed, and might receive no mercy, but be exterminated, just as the Lord had commanded Moses.” No choice or free will there.

Your god worked with Satan to get its plan to work per Luke. How does working with evil reflect on a supposedly good being? No blood sacrifice, no salvation.”

“Their hardened hearts were due to their unbelief. They chose not to believe in Him and He used that for His purpose. It’s no different than someone who decides they aren’t going to follow the rules on their job. That is a choice. Because of their choice their boss intervenes and fires them. Even though it wasn’t their ‘will’ to lose their job, their choice resulted in losing it. Or, if you have a child that refuses to take out the trash on their own, but after a while you force them to do it even though they don’t want to. They still had a choice to do it on their own.”

That’s quite a lie, Aldtrick since the bible says that this god hardened their hearts, not what you tried to claim.

and more lies. Nothing is said about this. You’ve made it up to excuse your god. Nice to see your claim for free will disintergrate, Aldtrick. If this god can intervene anytime, then there is no free will.

Also nice to see you admit your god had to work with satan.

I’m going to make it short and simple. Our vertical relationship with God is the same as our horizontal relationships with one another. God has given us free will to chose or reject Him. As we go about our lives, He intervenes from time-to-time based on that decision for His divine purpose. As parents our children have free will. Children make choices on their on, but sometimes parents intervene based on their choice to obey them.

Again, still no evidence of free will at all with a god that can negate it at any time. You try very hard to try to claim human relationships are the “same” as a relationship with a god. That’s very silly, Aldtric.

You are digging yourself in deeper.

One last comment…1 Corinthians 2:13-14
New King James Version
13 These things we also speak, not in words which man’s wisdom teaches but which the [a]Holy Spirit teaches, comparing spiritual things with spiritual. 14 But the natural man does not receive the things of the Spirit of God, for they are foolishness to him; nor can he know them, because they are spiritually discerned.

and still more failure. Every Christian claims that the holy spirit tells them the “truth” and insists that any other Christian who claims the same thing is lying because they have no evidence.

You are again trying to claim that no one can “really” understand except you. That’s false. We see that all Christians do this since your claims don’t match.

1 Corinthians 2:14
New King James Version
14 (A)But the natural man does not receive the things of the Spirit of God, for they are foolishness to him; nor can he know them, because they are spiritually discerned.

Yes, so you’ve said. And repeating verses from a failed set of books is not impressive. Paul failed, Aldtric. He lied and claimed that JC would be back soon, e.g. during Paul’s life. It’s always good to see a Christian following a false prophet.

Thanks for adding to the discussion. I expected your responses as much as you expected mine. I will be praying that God INTERVENES and softens your heart and give increase to any good seed that’s been planted in you and kill the bad. Seeds of faith in Him through Yeshua the Messiah, Seeds of repentance. Seeds of salvation and seeds of a lifetime of real relationship with Him and much good fruit. Be BLESSTIFIED

It’s always amusing to see Christians trying to pretend that their version is better with the attempts to use “Yeshua” rather than Joshua or Jesus.  If you really want cred, then use the Hebrew.

It’s great to see you trying again to try to pretend that your god’s interference with free will isn’t exactly that.  Intervene also means “ to interfere (come into collision or be in opposition) with the outcome or course especially of a condition or process”  You want your god to mind control me and surprise, that won’t happen.  Your prayers fail.  So, Aldtric, why would this be?  That your god loves an honest atheist?  That you aren’t a Christian? Or that your god doesn’t exist.  Your silly attempt to try to make a brand out of your religion is hilarious. Really, “blesstified”? Ii guess you don’t think that being blessed is enough.

And the failed attempt at a Parthian shot.

Which isn’t a parthian shot.

6 “Do not give dogs what is holy, and do not throw your pearls before pigs, lest they trample them underfoot and turn to attack you.

yep, and another excuse given when supposed omnipotent beings fail. Again, nice “One last comment…” Aldtric. Such a quote from JC, who speaks like any charlatan who fails. Like any pyschic or theist, your god suddenly is powerless: “5 And he could do no deed of power there, except that he laid his hands on a few sick people and cured them.” – Mark 6

Why is god so limited by disbelief?

Well, hopefully that is it (I did get a few more bible verses copy and pasted at me).  We’re back to Christians trying to be insulting.  But still no evidence for their claims.

I’m posting because you aren’t the only one who thinks this way. I want my blog to be a forum for discussion. However, I’m not going to keep going back and forth. I will leave you to your reasoning. However, I won’t continue to entertain you blasphemous comments. I have had God answer more prayers than I can count. I won’t begin to tell you about them because you will have another explanation. I do appreciate the fact that you have given me another person to lift up in prayer. I love you and want you to come to know the one and only LIVING GOD, Yah, Adonai, The Lord God of Israel from Eternity Past to Eternity Future, through our Lord and Savior Yeshua, the Messiah, the Lamb of God, the Son of God, the Living Word. I will be praying for you. I only ask that when you are converted, that you strengthen someone else. BE BLESSTIFIED!

I know you won’t keep going back and forth, Aldtric, since you have realized you have nothing.

You try to hide behind claims of “blasphemous comments”, when you can’t show your god exists to be upset. And your god seems to have no problem with what I say, having not smited me yet.

If it is true and you’ve had your version of your god “answer more prayers than you can count”, you are quite a selfish man since you’ve never prayed for anyone to be helped. We have kids with cancer, vets who suffered terrible amputations and brain injuries and surprise, Aldtric couldn’t be bothered to pray for them or this god to heal them.

Yep, you claim you are praying for me. Nothing happens and you failed, Aldtric. How about you pray for people who need it? But of course you won’t since you know that nothing will happen.

Not converted, and you are a false prophet when you claim something will happen. I assume you do know what your god thinks about people who lie and claim that they speak for him, right

I’ll keep updating to see just where this goes.  (well, I would but he collapsed in failure). 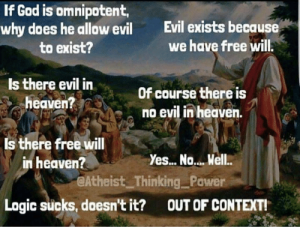