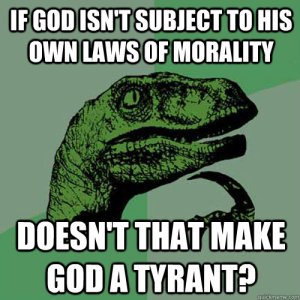 Happily, a Christian has chosen to reply to my responses to the Christian claims from the earlier blog post.   It is a classic since it contains every excuse that Christians usually offer and goes out of its way to ignore the hard questions.

1. “There’s a common misconception that the answering of prayers must always be noticeable, knowable, visible etc. …”

This set of excuses is nothing new for a Christian. They have invented excuses why their god doesn’t answer prayers and ignore their bible since it is inconvenient.  The bible says that this god will always answer prayers with what is asked for and answer quickly.  There is nothing that says that the “answer is no.”  Trying to claim that prayers are only answers if they agree with this god’s will shows that there is no free will and that praying is worthless.

Alan also invents this god that allows horrible things to happen to people and others to “teach” them.  I am happy to say that I don’t want anyone hurt to teach me anything at all.  There’s also the problem that the bible says that our fates are already sealed and teaching does nothing at all for this (Romans 9, Matthew 13).  I do have to wonder why this god doesn’t answer the prayers of the children that priests and pastors rape.  Is that to “teach” them?  Hmm, maybe that’s the excuse priests give too.  “It must be god’s will since he didn’t stop me; I’m a teacher!”

2.“Well, we can look to the Bible and Church history. The scripture is not sufficient on its own (sola scriptura), but requires an authoritative teacher that is guided by God. …”

It is a Catholic thing to pretend that other things are needed in addition to the bible. It is a Protestant thing to pretend that only the bible is needed. So, which is right?  Neither can be demonstrated as true.  Alan and the RCC want to pretend that they have the only right interpretation, just like the hundreds of other sects.   The RCC also didn’t convene the various councils, the Byzantine Empire’s government did.  Every sect claims to be the original or closest to it.  Still no evidence any of these sects are right, if any at all.

No Christian can show that they are even a Christian per how the bible says you can tell.  And there is no problem with declaring that there is no “ultimate truth”.  There is no logical reason to think that there is.  Just beause someone can imagine one, or at least the vague concept of “perfect” or “greatest”, doesn’t mean it exists (that’s why the ontological argument for god fails too).

3.“I understand how it can seem that way from the outside, but to suggest that nobody has ever heard a message from God requires some kind of omniscience…”

No, it doesn’t require some omniscience.  We have evidence that none of the essential events in the bible have happened and entirely different things did happen on any date that believers may want to postulate for those magical events.  There is no reason to think that some god talks to people through their mind or through a hairdryer.  Alan’s argument also places his god into a bit of a bind since it claims it is the only one and we can’t, per Alan, think that is the case.  Gods could be speaking to people all of the time.  I’m also sure that Alan would insist that we can know if someone talked to god since people who harm and murder do this all of the time “God told me to…”

4.“Good quip at the beginning about this person being the best God has to offer, but also not really relevant. …”

That we have such poor apologists like Alan, it does become a joke if they are the best this god has to offer.   Alan doesn’t want the message judged by the messenger, but since the only evidence given is the messenger’s baseless claim, then we have no choice.  This god does a horrible job of conveying some truth since Christians can’t agree on what it is and they again, can’t show that they are Christians.

No evidence that this god cares about anything, or exists.  The church offers help only if they can proselytize.  Humans do the work, not some god.  And indeed, as per Alan says, this is supposedly an “omniscient, omnipotent, omnipresent Deity”.  In the myths, it provides food and water with a thought.  Why does it need humans now?  As for the “body of Christ” being active all around the world, that’s not quite true since Alan is sure that Christians who don’t agree with him are part of that body, those ol’ sola scripturists.

5.“All Christians agree in the existence of Hell. Yes, I’m being picky here. “ No, they don’t all agree on the existence of hell or what it is. And yes, Alan is being “picky” here aka trying pretend only his version is the right one. He tries to claim that Christians who don’t’ agree with him really aren’t Christians.  Again, so much for the “body of Christ” that Christians want to count in the billions, but also want to claim that many of those billions don’t’ really qualify.  The trinity is not required Christian belief, neither is that this Jesus was divine.  Alan seems to forget that there were many versions of Christianity and still are.  Christianity isn’t the one big happy family that the RCC leads that Alan would have us believe.  Even the gospels show vastly different Christianities.  Now, John does give one way to know a Christian: if they can do miracles as good or greater than JC and get their prayers answered (John 14).  Where are the Christians who can do that?

“21 And baptism, which this prefigured, now saves you—not as a removal of dirt from the body, but as an appeal to God for a good conscience, through the resurrection of Jesus Christ, 22 who has gone into heaven and is at the right hand of God, with angels, authorities, and powers made subject to him.”  1 Peter 3.  Yeah, that isn’t agreed upon on how it is done either.

Like C.S. Lewis, Alan would prefer that Christians not talk about their hell or their disagreements.  People tend to see a god who kills kids, who damns people for no fault of their own, etc as less than “loving”.  As for the RCC doing “fine” we see rifts in that sect also, unable to determine if they want to join the 21st century or stay in the 13th.

6.“True, all Christians make the claim that the Holy Spirit is conveying truth. Yes, these claims can contradict. …”

There needs to be no right claim at all from theists; that is a false assumption.  They can easily all be wrong.  And, that none can do what the bible promises, this appears to be the way to bet.  Every Christian claim that they can deduce that theirs is the right version; they can’t.  Alan can’t.

7. “To be fair, the incorrect view is that of the Christian’s here. Regarding God isn’t a requirement to have a moral standard. …”

Christians do indeed try to claim that they have an objective moral standard that is from their god.  They do not.  They do not, and evidently cannot, agree on what morality their god wants.  They all have different Paul does indeed claim that the laws of this god written on their hearts and that silly claim cannot be shown true, and can be shown false in the sad cases of feral children.  Humans must be taught how to behave.  Many Christians have the arrogance and ignorance to try to claim that everyone is “copying” from them when it comes to morals.  That is not even remotely the case.  Paul is a rather nasty character who brags how humble he is and who tries to curse anyone who dares not agree with his version of Christianity.  He also was under the delusion that women aren’t equal to men.  I’m also quite happy to throw out the other NT writers since they advocate for morals like slaves shouldn’t try to gain their freedom and non-christians should be killed.

What humans have are a set of moral rules that allow civilization to work better and those have survived the evolution of humans from hunter gatherers to the farming and then technological cultures we have now.  No god needed, just trial and error.

12 thoughts on “Not So Polite Dinner Conversation – The conversation continues…”