Good ol’ Pat is beating the drum about Dungeons and Dragons again and how this game has “literally destroyed people’s lives”.   Ah, Pat, we can always count on you for a good lie for Jesus! I’m sure that Pat is feverishly pawing at his Chick tracts (absolutely ludicrous Christian tracts that tell a number of pitiable lies about anyone Jack Chick doesn’t like. He’s a KJV-onlyist TrueChristian who really really hates Catholics). Chick is sure that D&D tells people how to cast “real” spells.  Damn, for playing it for over 20 years, where’s my fireball?!   You can read the histrionics in the tract here. For shame, Jack and Pat. All of that false witnessing, because anyone who has actually played D&D knows that you never have.  Tsk, putting your supposed eternal souls on the line to lie about a game.   By the way, Dungeons and Dragons is now owned by Hasbro through their subsidiary Wizards of the Coast. So, you know, ooooooh scary!  🙂

For those not of the nerdish persuasion, Dungeons and Dragons is a role-playing game; you create a character and then it’s a game of make-believe. And not like the video game version of RPG.  In pen and paper D&D, you can create just about anything as a character, not limited to whatever the game designer put in.  You are limited by what the “Dungeonmaster” says can fit into his world.  He’s the author of the story line and often the author of the entire gaming world. (D&D isn’t limited to classic medieval fantasy a la Lord of the Rings) .  The DM is any other characters yours might meet, he’s the weather, the monsters, etc.  Essentially the DM is the creator of conflict in the narrative: man versus man, man versus nature, man versus society, and if he’s good, places your character into situations where it’ll be man versus himself.  My husband, an excellent DM if I do say so myself, loves to do those last two.  It’s nice, and a right pain in the ass sometimes, to have an English Lit major creating stories. His games aren’t “Open door, kill monster, take treasure.”  Oh no, we have to deal with moral ramifications, like if orcs have souls, can a half-demon be good, is it better to do the good thing or the lawful thing……  My theist audience should be amused to know that I occasionally play priests.  It’s one thing to believe in a god that actually (in the gaming world) does something.

Most RPGs have an element of randomness in them, brought by using a handful of polyhedral (many sided) dice.  These determine how good or bad your character does in situations.  You’re a warrior?  Well, you’re likely to have a good score in that skill. Roll the dice and if you get the right number, you’ll succeed in some degree “I slash the orc with my longsword!”.  Roll the wrong number, and you can figure your sword slipped out of your hand and now it’s time to run.  It’s no fun to always win and some of the best “No shit, there I was…” stories come from failing miserably.  Alas, some folks don’t realize this and cheat.  This happens on both sides of the table. A bad DM will try to railroad characters into doing what *he* wants them to do in the story e.g. if the DM doesn’t want a favorite non-player character to die, then no force in the ‘verse will be able to kill him, no matter how good the dice roll. We played with a DM like that; amazing on how pissed off one can get when someone tries such nonsense. I’d still like a chance at him in a dark alley… purely to role dice you understand…  🙂

I met my husband while playing D&D.  We were in college, he offered to run a game for a group and I leapt at the chance.  I had one of the early boxed sets but never had a chance to play.  I just read the choose your own adventure books J and watched the cartoon.   So much for Patty’s claims of destruction, we’ve been married 22 years.

Oh yes, I did also read Mazes and Monsters, the book that was part of the whole hysteria.  Of course, the hysterical folks didn’t read the book since it very well establishes that the poor fellow who was mentally ill was that way from the beginning.

We’ve played other RPGs too.  Alternity(probably my favorite rule system), which is a somewhat generic system, and its science fiction world “Star Drive”;  XXVc, loosely based on the Buck Rodgers concept; Shadowrun, which is the “future” 2050 we thought there would be in 1986 plus magic.  I very much like that last one,  big guns and big spells are fun!  Also have done Deadlands (magic western circa late 19th century), and dabbled in the World of Darkness stuff (urban vampires, etc) but it was too angsty for both of us.

Now, we’ve gained a ridiculous number of gaming books over the years as well as some pretty cool gamer stuff.  Gaming books multiply like rabbits.  First you get the basic rules, and then the extra rules for the DM.  Then the world settings, and maybe a few novels based on the world and it gets out of hand very quickly. 🙂

Here are some of my husband’s cooler things.

What looks like a pregant armor plated apple is an armored dice bag.  My husband has an unnatural obsession with dice and has pounds of them!  🙂  They are pretty, I’ll admit, with the new high impact plastics they use in them.

The pentagon is a dice arena, to keep the little buggers from hopping all over the place.  Glass table tops, like my husband gamed on when in high school, are notorious for shooting dice far away.  I believe the fellow who was making the arenas has joined the military so those are not being made at the moment. The Story Cubes are a nifty little toy that allows you to roll dice and figure out a story from what comes up.  It’s a great exercise for writers and kids. (and don’t ask me why there are weird blurs in these photos.  maybe it’s the demons!  🙂  )

The necklace is a clever thing to hold the classic 20-sided die that is most known in D&D. Some of the swirled and pearlized plastics make for a nice, if nerdy, pendant. Chessex made the necklace but appears not to make it anymore.  They do make dice galore! The small dice in the foreground are Crystal Dice, not made in the classic polyhedral shapes.  You can barely see it, but these are red and black swirled with gold numbers. 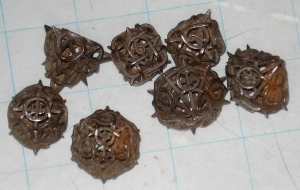 Next are the highly funky dice that my husband got from Shapeways (dice designer: ceramicwombat).  They’re the result of what you can do with 3D printers.  They are steel.  They are indeed openwork.  They are also something you do not want to step on.  Shapeways has all sorts of cool things you can get. I do like a lot of their rings.

Last are the miniatures.  D&D originated in war gaming, and war gamers love their miniatures.  So, enterprising folk created detailed ones of class characters, first in lead, and then in less toxic alloys.  These are a few of ours: barbarian female warrior, mage, half-elven ranger, half-drow female, classic dwarf, human priestess.  They are from various companies.  We like Reaper for most of their stuff.

We have far too many, more unpainted than painted and I’m old enough for my hands to not be that steady anymore.  These are around 23-25 millimeters high and are generally used to lay out on a board (you can see the graph paper grid) to figure where every character is during a battle. Some folks are fantastic miniature painters, we’re pretty good.

Well, that’s it for the tour through another of Vel’s hobbies.

7 thoughts on “What the Boss Likes – Dungeons and Dragons….and Pat Robertson making a fool of himself again”