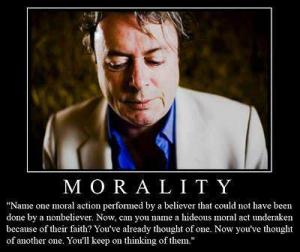 This week’s Sunday paper had a most entertaining column from Billy Graham Evangelical Ministries.  The title my local paper gave it?  “Atheists live by faith of God’s nonexistence”.  Yes, that old saw again.  (link to the sad little thing here).

Mrs. J.Q., the questioner, tells BG that her cousin has read some books by atheists and has now decided to become an atheist.  She of course has to add “much to his family’s disgust”.  The term disgust does give a lot of insight into just what Mrs. J.Q. thinks about atheists. Not grief, not concern… It’s disgust.  🙂

BG doesn’t know if there are more atheists, though “he” thinks there could be since there are more people in the world.  He does think that atheist are being more vocal and “because our society is getting more secular their message often gets more of a hearing.”   I do think that atheists are being more vocal, though we were just as vocal and perhaps more so back in the late 1800s.  Great freethinkers, like Robert Ingersoll, etc, gave public speeches to thousands.  It seems that it’s only since Soviet Communism that atheists had to hide their opinions for fear of being considered “commies” and being subject to the attacks like the lunacies of the House Committee on Un-American Activities  and Sen. Joe McCarthy and of course the rather sad little lies about atheists ginned up by theists… like Billy Graham.

According to Billy, “An atheist is a person who believes that God doesn’t exist.”  A decent definition, to be sure, though I would add “based on evidence.” to bring it completely in line with reality.   Here’s where BG is sure he’s being clever:  “But look carefully at that definition: An atheist believes God doesn’t exist.  He can’t prove it; he can verify it; he can’t demonstrate it.  He lives only by faith – faith he is right and everyone else is wrong”.

We can see that Billy apparently is using this definition of faith: firm belief in something for which there is no proof (Merriam Webster).  It’s similar to the definition faith in BGs bible: “Now faith is confidence in what we hope for and assurance about what we do not see.” – Hebrews 11

It’s easy to point out Billy’s hypocrisy.  If it is bad to believe in something with no evidence, no verification, no proof, no demonstration, then theists, including Christians, are just as guilty as atheists.  However, atheists *can* provide evidence to support their claims that the Christian god does not exist.  I have yet to see evidence from theists that their gods exist.   We have the same claims offered by them, that the mere existence of the universe is evidence of their particular god, etc.  But then which god should we believe in? Because we know that Billy thinks he’s right and everyone else, including other Christians are wrong.

BG then says that people who “claim” to be atheists (hmmm, who would know better what they were than the atheists?) often don’t look at “all the evidence and concluded that there is no God.”  Now, can you guess what Billy says is the real reason that people are “often” atheists?  Why yes, you’re right.  He uses the old claim that atheists, at least those who didn’t look at the evidence (ahem), are just rebels.  “They don’t want anyone (including God) to interfere with their way of living.”   I will admit that yes, I don’t want a god that recommends rape and genocide to interfere with my way of living which I find quite decent and humane.  And I wonder about Billy.  It seems that he doesn’t like this god interfering in his way of living too since he doesn’t follow the laws of his god either.  Where are all of those people that Billy has killed for working on the Sabbath?  Indeed, when is the Sabbath?  Sunday?  Saturday?  Friday?  Has Billy enjoyed a tasty shrimp?  How many people has he killed for adultery?  For those of you who might try to claim that those laws don’t apply to Billy, can you confirm for me that the earth and heavens are still here?

Billy does admit that “not all atheists are bad”.  Indeed, some of us are even “commendable”, gasp!  But Billy then goes right for the usual lie that “some of the worst atrocities in human history were committed by regimes that were based on atheism”.  This is the usual ignorance of history that so many TrueChristians evince.  Please do read the history of the phrase “Gott Mit Uns” ,  for the story behind one of those supposedly “atheist” regimes.   Of course, if one wants to assign causation, hmmm, where does that leave regimes that stated that a god was behind all that they did?    Billy does call us atheists fools and all of us “corrupt” and our ways “vile” (Psalms 53)  but seems to forget what JC says about calling people fools. Tsk.  🙂

I do like how Billy’s claim about the “some atheists” does show that one doesn’t need his god or religion to be moral and good and “commendable”.  But but aren’t we all corrupt and vile?  Darn, I really wanted to be corrupt and vile.  🙂  Seems that bible is wrong again because Billy says so!

Finally, Billy says to pray for that cousin!  This god is the only thing that can supposedly convict Cuz of his sin and open his eyes to “truth”.  He also says that Mrs. J.Q. prays for herself so she’ll be an example o this god’s love.  Seems that prayer has already failed with her sniggering about being disgusted. The missus is to love and be compassionate to her cousin but alas it says to be anything but that to atheists in the Christian handbook.  Per JC, folks like me are to be killed at worst and to be separate from at best.  So much for love and compassion eh?

Now, I’ve been prayed for a LOT, if we are to believe many many TrueChristians and a few Jews, Muslims and pagans.  Nothing has happened yet.  Again, why should we believe prayer will work in this instance or any?  And what *does* become of those claims of free will that so many TrueChristians make with demand that God changes someone’s mind?  (oh, bonus new verse I found showing no free will: Ephesians 2:9)

We’ve seen repeatedly that TrueChristians, from Billy Graham and his staff to bloggers, have no problem in lying about atheists.  We’ve seen that in the comments of this blog, by our TrueChristians KD and Potato.  We can even see KD lie about atheists on his own blog, a pair of lovely recent ones: where I am claimed to have said a certain thing (pity that KD doesn’t know about Ctrl+F and how it’s easy to show I didn’t say what he claimed), and KD’s creed of what his imaginary atheists think.

We know that the bible does say that lying is not something that this god supposedly appreciates.  We also know that we supposedly can tell who is who by their fruits.  I have read the bible, I have watched the actions of its purported believers of all stripes, and I have found evidence that demonstrates that these religions are not true.  These reasons and others are why I am an atheist.  Considering the situation above, this quote from John Locke sums it up well: “I have always thought the actions of men the best interpreters of their thoughts.” – John Locke quotes.

Christianity isn’t worth my respect or belief.  As you can see, sometimes neither are its followers.