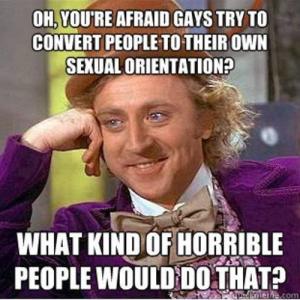 The Public Religion Research Institute has come out with a new poll on the religious attitudes in the US, specifically about gender and sex: “Majority of Americans Oppose Transgender Bathroom Restrictions”    It indicates that attitudes are changing, with white evangelicals losing ground for their claims of having a divine “truth”.   Curiously enough, this group voted overwhelmingly for Trump, a man who ignored them until it was politically convenient.  This does show how much a promise of returning people back to a time when they felt in control can get their support.

A Salon article about the research, says the following: “Despite all the conservative posturing about how their movement represents “real” America and liberal political attitudes are restricted mainly to the “coastal elite,” new research from the Public Religion Research Institute (PRRI) suggests that, at least in political terms, most Americans are secular in their orientation. While many Americans may still hold conservative personal beliefs, when it comes to the issue of church-state separation, large majorities reject efforts by the religious right to use the power of the state to impose conservative Christian values on others.

In fact, the polling data shows that there’s really only one group of Americans that rejects a secular society: White evangelical Christians. And this study is just further evidence that a lot of the political polarization in our country is the direct result of white evangelical Christians realizing that they are no longer dominant majority, and lashing out angrily in an effort to regain the levels of dominance they used to enjoy.”

The need for no change and obedience to their demands is what many Christian conservatives evince.  They need that external validation for their beliefs; the mere existence of anyone who doesn’t agree with them (and isn’t being punished by some god) shows that their beliefs are not quite what they claim.  If they do not get this obedience and agreement, they often seem to act out like a three year old who isn’t getting her way.

For additional information on the actions of those who need to imagine that they and theirs are in authority, I recommend Bob Altemeyer’s The Authoritarians.

4 thoughts on “Not So Polite Dinner Conversation – a new poll indicating a more secular America, and a hardening of evangelicals”