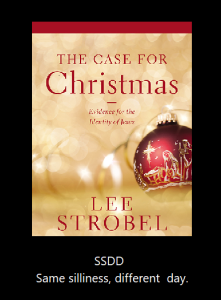 Part Two – Beneath the Fake News

So, here we have week two of the “case for Christmas” and unsurprisingly, we have a conservative Christian using Bumbling Idiot Donnie’s favorite lie.

Per Lee, Christmas has been “victimized” by fake news.  Amazing how a supposedly omnipotent character just can’t do a thing about us puny humans, like keep its story straight.

The claim here is that the similarities of the supposed birth of Jesus by a virgin, into stressful circumstances, like so many other divine heroes aren’t similarities at all.  This is the one “real” time that this happened, and just ignore that many other cultures and religions made similar claims.  This is what Strobel wants everyone to believe.

He starts with some quotes by Thomas Jefferson, etc that state that the myths of Christianity will be considered equivalent to the myths of Rome and Greece in the future.  Then we get a review of Mithraism, that there was a man/god born on December 25, of a virgin who was in a cave.  This man/god was then sacrificed.  Now, as Lee notes, this isn’t quite the right story, and that some things have apparently been added, like the virgin in a cave.  Mithras is claimed to have emerged from rock full grown.   However, one can see that emerge from rock and having supposedly been born in a cave and emerging from it could be construed to mean the same thing, at least in metaphor. However, I agree, the Mithras connection seems to be a little far-fetched.

But that doesn’t mean that there aren’t virgin birth stories of heroes that do stand up to looking at them as precursors of the invented nativity story.  Indeed there is one in the book, 2 Enoch,  that has the miraculous virgin birth of Melchizedek, a high priest.  This character is mentioned in the Letter to the Hebrews where Jesus Christ is compared to him.   So we can establish a reason why the virgin birth was inserted into the story.   We also have a story that Zoroaster, the founder of Zoroasterianism, was  born of a virgin who was hit with a shaft of light.

The gods having children with humans is nothing new too. We even have that in the claims of the “giants of the earth” in Genesis.   Asclepius was the child of Apollo and a woman.  Suetonius, a historian who many Christian apologists run to, claimed that Emperor Augustus was the son of Apollo who impregnated his mother as a snake and Virgil proclaims him as a savior.  And the Buddha was supposedly from a white elephant entering his mother’s womb through the side of her body, which may or may not indicate a virgin birth. Buddha was also visited by a mystic as JC was claimed to be visited by magi.

We then go on to have Lee admit that December 25th is not when Jesus was supposedly born.  He points out that it would probably have been in the spring, when the shepherds would be out with their flocks.  Lee makes a claim that around 200 CE Christians got together and decided that JC was born on May 20.  I hadn’t known about that so I looked it up.   What I found was interesting because I hadn’t realized that  Christians made up all sorts of dates for when JC was born:  November  17, 3 BCE; January 6, 2 BCE; May 20, 2 BCE; April 20, 2 BCE.   Of course, some Christian claim that those dates were the conception of JC, not the date of birth.  So it’s all as clear as mud so far.

Where lee gets his May 20 is from a quote from Clement of Alexandria “ “And there are those who have determined not only the year of our Lord’s birth, but also the day; and they say that it took place in the twenty-eighth year of Augustus, and in the twenty-fifth day of Pachon.””  So, it seems that there was no meeting of Christians, and Clement is reporting what he has heard, not some great decision.

It seems that Lee’s only argument is that the story must be true because Mary had to be a virgin.  But we have no evidence of Mary, her sexual status or Jesus.  That the story may be unique in some form is no evidence it is true.  Lee says he spoke to a historian, Edwin Yamauchi.  What he fails to admit is that Yamauchi is a Christian apologist and creationist, who is affiliated with groups like the American Scientific Affiliation, which has the goal of making science match with Christianity.  Yamauchi states that the birth myth of Dionysus was not a virgin birth, however, that is not the case since some version of the myth do have Semele being impregnated by drinking the heart of the dead Dionysus and became pregnant that way, to birth the god again.  Either Yamauchi is ignorant of the various version of the myth or was being dishonest.

We also have Yamauchi stating that

Again a Christian tries to take refuge insisting that the parts of the bible that are inconvenient are just “metaphor”.   We know that is not the case in the bible since this god is wandering around, has feet, etc.   Christians do love to claim that their god is ever so different from other gods.  That does not work when one reads the bible.  This god is presented as very very human, jealous, ignorant, petty, spiteful, vain, etc, just like ever other Bronze/Iron Age deity invented by humans.

Lee also cites J. Gresham Machen, a theologist who died in 1937 (wiki entry is a good article for how Chrisitanity splits), as saying “Could there be anything more utterly remote from the representation in Matthew and Luke than these stories of the amours of Zeus?”   Nice rhetorical question, but the answer to that is that the virgin birth story is quite similar to the stories of the amours of Zeus, a god needing to procreate with a human woman.

We have Lee saying that since the other similar stories are about the beginning of existence of a man/god, then they can’t be considered the same since Lee claims that Jesus has always existed.  However, this is a matter of debate amongst Christians themselves.  And again, a unique part still makes nothing true.

Justin Martyr is mentioned in Lee’s further attempts to claim how unique and therefore true the virgin birth nonsense is.  Martyr was an early Christian and appealed to the Romans  (chapters 21 and 22) not to persecute Christians.  In doing this, he compares the virgin birth of Jesus to the births of the various divinely fathered heroes in Greek and Roman religion as a reason why Christians should not be persecuted that they are the same.  Lee doesn’t like that and has to claim that Justin didn’t really mean that, he was only pointing out that other beliefs weren’t persecuted so why them.  However, by drawing the comparison, he shows that there is no difference between the claims of virgin or magical conception.    There is no evidence that Justin’s comparison was just a “rhetorical flourish”, since that comparison is repeated in the document.

Strangely, Lee tries to claim that many of these “supposed virgin births” stories didn’t occur after Christianity.  He unsurprisingly presents no evidence for that at all, and it should be interesting for him to show that Christianity existed before the religions of Greece and Rome which can be documented to have had temples built around 800 BCE.  It’s hilarious to see him back track then and say “well if some are early than Christianity” they simply can’t have influenced it, another baseless claim.  He tries to claim that since Judaism did not incorporate other beliefs, a claim that is baseless, then Christianity couldn’t have done that.  For all he complains about logical fallacies, and he is right that saying something *has* to have influenced something else is a fallacy, he uses logical fallacies constantly.  We have no evidence that Paul did not know about Plato’s writing about Plato’s god, so Lee appeals to the absence of evidence as the evidence of absence.

Restating a false claim doesn’t work for Lee.  He finishes by insisting that the other magical birth stories have *no* resemblance to the nativity.  That is obviously untrue.  He accuses, with no evidence, that people who point the similarities out “mistranslate” the text.  The next scholar he mentions, and claims didn’t agree that the virgin birth story was influenced by other sources, has no evidence to support his claim and doesn’t believe in the virgin birth at all.  ““The literature of the world is prolific with narratives of unusual births, but it contains no precise analogy to the virgin birth in Matthew and Luke. Jesus’ ‘virgin birth’ is not ‘pagan’””    However, Boslooper also says “Because of the mythical form into which this truth was cast, Christianity was able to evangelize the ancient world. The story of Jesus’ origin in its Biblical form established a natural bridge between the Christian community and non-Christian society. … The Christian story made it possible for God’s Word concerning incarnation to be communicated to the hearts of masses of men.”

It appears that Boslooper does indeed find that the use of common mythic tropes were used to validate Jesus and that’s where the virgin birth came from. 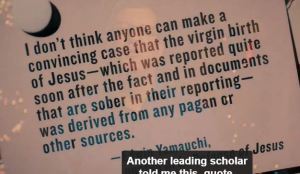 Well, what he thinks doesn’t matter when it is easy to make a convincing case that the virgin birth was an addition, and never happened.  There was no ‘quite soon’ reporting and the sources are anything but “sober”.

We have plenty of ways to know how this virgin birth nonsense can be imported into Chrisitanity.  To claim that is not the case is rather wonderfully funny coming from Christians who depend on nonsense.

Poor Lee, he has to claim that decades are “virtually immediately” after an event.  All of the nonsense in the bible has all of the marks of every other myth out there.  So when we celebrate Christmas, we can know that we are celebrating a fictitious character that Christians themselves can’t agree on.  Lee wants to pretend his wishful thinking and legends are true. They can’t save or support him. They are as much fake news as he wants to accuse other of making. Claiming that since the bible says it is based on eyewitness testimony isn’t evidence it was. We know that Peter and John didn’t write 2 Peter or 1 John.  We have no idea who wrote them but it wasn’t the supposed apostles.

It’s humans who take care of each other, not some imaginary friend.  That’s the only “anchor” we have.