This weekend we decided we needed to make something new. My husband suggested that we wrap meat around “something”.   We narrowed that down to pork and the something to be a mix of cheeses and various flavorings. So we got a pork loin roast (a little over a kilo), cut it into one long flat piece of meat by “unrolling” it with a nice sharp knife. And then we stuffed it with the cheese mix (recipe to follow). 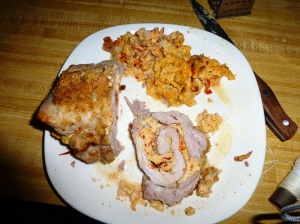 You can see that the end result where the excess cheese mix ended up as a blob separate from the roast. The roast didn’t turn out too bad, and it did retain a nice spiral of stuffing. But it wasn’t pretty.

The cheese mix was:

6 oz. Grand Cru cheese, grated (this is like a Gruyere)

2 dried guajillo peppers, soaked and diced (for some reason ours had no heat whatsoever. They did have an excellent sweet pepper raisin-ish quality).

This was mixed and spread on the pork. I tied it into a roll (a leftover skill from working in the meat department) and we seared it in our La Creuset in a bit of oil. After it got a little browning, we poured in a cup of pinot gris and set it to roasting at 350 degrees F for around 1 and a half hours, until it read around 180 degrees F internally.

Very tasty, if ugly. We also had a Riesling with this, a Pacific Rim 2012. A good wine, with the usual honey notes which always go well with the salty richness of pork and cheese. 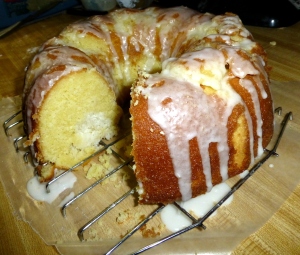 We’ve also made a bundt cake. I’m feeling so retro 🙂     It was the King Arthur Flour Co’s Lemon Bundt Cake with Coconut filling.   I’m about 90% sure that this coconut filling is what I’ve been looking for these past years. At one point, there was a chocolate bundt cake mix with coconut filling that my husband I both could remember liking a lot. I tried it a couple of times and I could never get the consistency and flavor right.  This *is* right.  It’s not too sweet and has a nice soft texture. So, next time I make a cake, it’ll be a chocolate version of this.  I would have never thought to use what amounts to a meringue inside a cake. The cake isn’t quite perfect since it’s pretty much inevitable that part of the top will stick and have to be scraped off the pan. But glaze can cover a lot of baking sins. I used about half of the “glaze” in the recipe to moisten the hot cake and added confectioner’s sugar to the rest to make the white glaze. The filling is also not centered but again, that is pretty much up to utter luck where it ends up.

That’s it for today. Eat well!